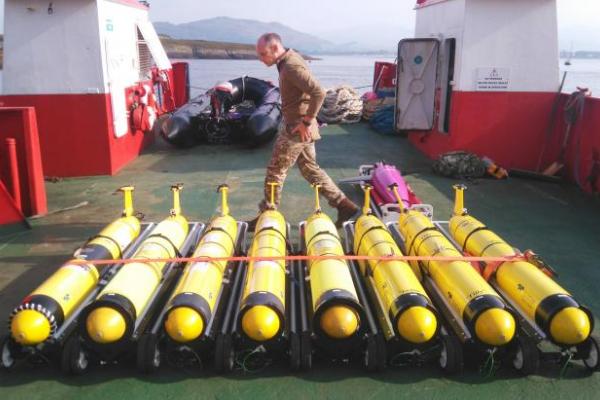 An ambitious two-week mission involving ten marine robots has commenced off northwest Scotland. The third in a series of demonstrator missions, this latest phase sees the largest fleet of marine robotic vehicles simultaneously deployed in UK waters. The mission comprises seven submarine gliders and three surface Wave Gliders that are working together in fleets to collect a range of environmental data.

Submarine gliders on the launch vessel at SAMS prior to deployment. Photo courtesy: NOC

Phase one saw a fleet of seven marine robots deployed from the Isles of Scilly, armed with sensors capable of monitoring marine life including plankton, fish, marine mammals and seabirds. The robots travelled up to 150 km offshore, with one of the surface vehicles covering 450 km in 12 days. Three of the surface vehicles were then redeployed in Marine Protected Areas offshore of Plymouth, where they successfully tracked tagged fish using novel acoustic receivers.

Phase two comprised two successive missions off southwest UK in 2015 and 2016, undertaken in partnership with World Wildlife Fund UK (WWF-UK) and Defence Science and Technology Laboratory (Dstl); these missions were used to further test how submarine gliders and unmanned surface vehicles can work together to observe relationships between ocean fronts and marine life.

This third phase is being run in partnership with the Scottish Association for Marine Science (SAMS) and is providing environmental data from an area off northwest Scotland to the Royal Navy’s ‘Unmanned Warrior’ marine robot demonstration. Real-time data are visible via the mission website, and will ultimately be available to the marine science community via the British Oceanographic Data Centre (BODC). Initial results will be presented at a workshop at the NOC in Southampton on 18 November 2016 as part of the annual Marine Autonomy and Technology Showcase.

NOC’s Professor Russell Wynn, Chief Scientist of the mission, said: “This deployment will showcase the capabilities of marine robots to the Royal Navy, and other defense and industry partners. The results will also inform the wider scientific and environmental community of the benefits of these new technologies as an alternative to manned vessels, which are relatively expensive to operate and have a larger environmental impact.”

Fraser Macdonald, who is coordinating the SAMS contribution, added: “Since 2009, SAMS has been using marine robots to support international science programs through our North Atlantic Glider Base and the Scottish Marine Robotics Facility, which has unique access to the deep waters of the northeast Atlantic. Participating as a key partner in this mission is a fantastic opportunity to contribute our scientific expertise and local knowledge”.

As well as collecting basic information on ocean temperature, salinity, oxygen, turbidity, and near-surface weather conditions, the gliders will also be measuring ocean currents, water depth, and the abundance of plankton in hotspots such as water mass boundaries (fronts). Some of the vehicles will be travelling over 150 km offshore of the Outer Hebrides, and venturing into waters up to a mile deep.

Most of the gliders will be piloted via satellite from an operations room in the Marine Robotics Innovation Centre at the NOC, but some project partners will be piloting their vehicles from as far away as the US and Australia. A primary objective of the mission is to maximize the amount of data transmitted back to the operations room in real-time, to ensure it can be used by Royal Navy and Dstl staff.

Commander Peter Pipkin, Royal Navy Fleet Robotics Officer, said: “It is a great moment to see the largest UK deployment of hydrographic unmanned systems”. Dr. Tim Clarke, a Dstl Marine Scientist added: “Dstl is using these trials to prove and demonstrate the capabilities of autonomous vehicles, leading to an improved and efficient maritime capability for the Royal Navy in the future”.

Rolly Rogers of the NOC, who is Operations Manager for the mission, said: “Over 20 organizations are working closely together to share resources and expertise on this deployment. Industry partners providing vehicles and piloting support include Liquid Robotics, Boeing, RS Aqua and Blue Ocean Monitoring, Royal Navy are deploying and recovering the submarine gliders, software experts such as Esri UK, Helyx and SeeByte will help us visualise incoming data, and Plymouth Marine Laboratory and UK Met Office will ensure we have the most up-to-date satellite images and weather forecasts to support mission planning.”