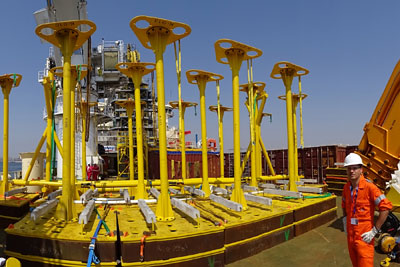 Following on from the installation of a Long BaseLine (LBL) acoustic positioning network at the giant Egina oil field off the coast of Nigeria, French oil major Total and its project partners have repeated their success using the same Sonardyne Fusion 6G technology offshore Angola at the even larger, even deeper, Kaombo oil field.

The campaign to deploy, calibrate and make ready for work the field-wide array of transponder frames, was completed in just 31 days using the seabed component of a Fusion 6G system. This was half the time budgeted for, a figure that is thought to have set a new unofficial record for this scale of operation.

Transponder frames being readied for deployment and calibration, a process that took a record breaking 31 days The campaign to deploy, calibrate and make ready for work the field-wide array of transponder frames, was completed in just 31 days using the seabed component of a Fusion 6G system.

Covering an area of around 1,300 square kilometers, Kaombo lies in water depths up to 1,750 meters. Development of the field will involve the drilling of 59 subsea wells, connected by over 290 kilometers of subsea lines leading to two floating production, storage and offloading (FPSO) vessels. The majority of subsea construction work is scheduled for 2016-2017, which will be supported by the permanent transponder frame network. First oil for the initial FPSO is expected in 2017, with production from the other two FPSOs likely to reach an average of 230,000 barrels per day in normal operating conditions out of an estimated reserve of 660 million barrels.

Fusion is Sonardyne’s sixth generation (6G) LBL technology platform, specified globally for its ability to meet the most stringent of subsea survey and construction positioning tolerances. Thanks to its unique Wideband 2 digital signal architecture, common tasks such as template installation, touch-down monitoring and spool piece metrologies can be completed quickly, efficiently and precisely regardless of the water depth.

The exceptionally fast deployment of Fusion 6G at Kaombo has been attributed in part to the extensive project planning workshops hosted by project partner Technip in France. Attended by teams from Total, Technip and Fugro, together with personnel from Sonardyne’s Survey Support Group (SSG), the sessions were used to review the full scale of the operation and consider the most efficient and cost-effective configuration of the LBL transponder frame network.

The SSG is a specialist department available to clients to support them in the most effective use of Sonardyne’s acoustic positioning and inertial navigation technologies. In addition, their role is to feed operational experiences back into Sonardyne’s engineering department to help ensure future technologies meet the needs of the markets in which the company operates.

Deciding the quantity, specification and location for each transponder within a seabed array is crucial to the success of any LBL project. As the contractor for the Kaombo SURF (Subsea, Umbilicals, Risers and Flowlines) package, Technip conducted the LBL array planning themselves, a process that involved confirming that there was clear line of sight between neighboring transponders and modeling acoustic network coverage at specific locations. By using the same specialist software as the SSG, Technip survey team was able to then share their proposed array design with Sonardyne for verification, thereby further increasing confidence in the plan prior to mobilization.

At Kaombo, the investment in time spent planning acoustic operations onshore was rewarded with a highly successful offshore LBL campaign. Commenting on this, Regis Mortier, Senior Survey Consultant at Technip, France said, “Besides Sonardyne’s expertise and field proven subsea technology, there were a number of innovative firsts that paved the way for quick and efficient equipment deployment at Kaombo. The use of stackable frames optimized deck space, saving time as we only had to use one vessel and make one trip out to the field. In addition, our innovative spreader bar meant we could deploy five frames in one sequence, thereby speeding up overall frame and Compatt deployment.”

Also commenting on the success of the project, Frederic Auger, Chief Surveyor at Total E&P said, “We can’t fault the preparation and professionalism displayed by all personnel involved with this massive project. With future time savings gained from not having to deploy many individual transponder arrays, the cost of installing a field-wide LBL permanent frame network that can be scaled from high accuracy metrology to LBL aided inertial and also LUSBL positioning for DP and drilling, means this investment will more than pay for itself within the first few years of the field development.”

From a Sonardyne perspective, Tom Bailey, Acoustics Surveyor, said, “The SSG is frequently asked to assist with many different aspects of offshore survey campaigns. On this occasion we were involved in the planning stages and in the post project wash-up workshop. It’s been very rewarding to see such a well organized and executed project successfully achieve its aims and exceed expectations.”