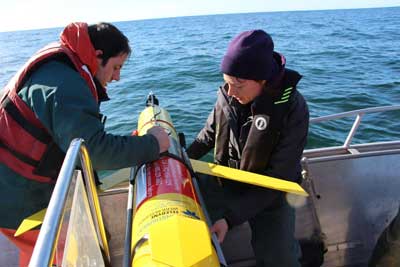 A University of Victoria-led mission that will deepen our knowledge of rare and threatened baleen whales and help protect them from ship strikes is underway off Flores Island in Clayoquot Sound, north of Tofino, BC.

Over the next three weeks, a two-meter underwater ocean glider equipped with acoustic sensors, sonar and hydrophones will allow researchers to track whale movements by listening to and recording their sounds along the shelf break in Clayoquot Canyon.

The BC project led by UVic geographer David Duffus, director of UVic’s Whale Research Lab, is part of the national WHaLE project (Whales, Habitat and Listening Experiment) which seeks to define whale habitat and develop, test and implement a near real-time “whale alert” system to reduce the risk of ship-whale collisions.

The project is funded by the Marine Environmental Observation Prediction and Response Network (MEOPAR) based at Dalhousie University in Nova Scotia. The multidisciplinary team is focusing on ecologically sensitive whale habitats on the coast of Atlantic Canada and now off western Vancouver Island. Initial success has been met on the East Coast in known habitats of the critically endangered north Atlantic right whale.

“Ocean gliders are a new technique for gaining insights into whale ecology on Canada’s West Coast,” says Duffus. “Many species of concern under Canada’s Species at Risk Act are termed ‘data deficient.’ We need more information on whale habitats and whale feeding ‘hot spots’ so we can put in protective measures, such as real time whale-alerts for shipping traffic.”

Large baleen whales—such as humpback, sei, blue and the very rare North Pacific right whale—are difficult to survey, mostly due to how much time they spend underwater far from land as they feed on tiny zooplankton and/or small fish. By listening for characteristic whale vocalizations, researchers will track the whales’ movements and distribution.

Since ocean gliders can monitor at night and in poor weather conditions, researchers will have more in-depth data to map baleen whale habitat and key feeding spots. The data will guide conservation efforts to protect whales from shipping traffic and noise in key marine locations.

The three-year WHaLE initiative is funded by MEOPAR with researchers at UVic and Dalhousie University and—for this mission—with support and/or collaborators from Ocean Tracking Network, UVic’s Ocean Networks Canada, University of British Columbia, Fisheries and Oceans Canada (Pacific), and 17 other agencies. Click here for a complete list of partners.