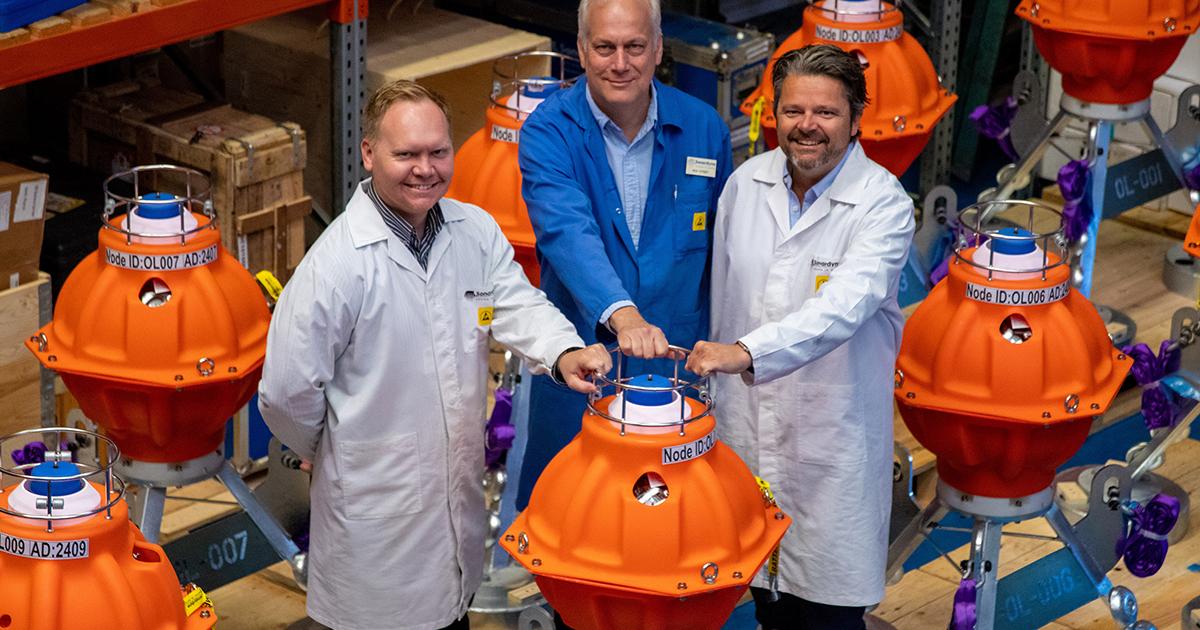 Norske Shell’s goal is to continuously monitor any movement of the seafloor at Ormen Lange, Norway’s second largest gas field. The data will help the energy company to detect changes that might be caused by ongoing gas extraction and inform its reservoir management strategy, as it continues to produce from the huge field over coming decades.

By monitoring vertical displacement of the seabed, operators can detect even small production induced changes in their reservoirs and overburdens, which can then help reduce subsurface uncertainties in their modelling and planning.

For the project at Ormen Lange, which will run from 2019 to at least 2029, a field -wide array of 50 Sonardyne Fetch subsea sensor logging nodes configured as pressure monitoring transponders (PMTs) will be deployed in 800m to 1,100m water depth. There, the Fetch PMTs will accurately collect pressure, temperature and inclination data at the seafloor, at pre-programmed intervals, throughout the full 10-year deployment. Using this data, vertical displacement of the seabed will be calculated, enabling Norske Shell to better track what is happening across the field.

This is the latest deployment of Sonardyne sustained observation technology at Ormen Lange. Sonardyne’s Autonomous Monitoring Transponders (AMTs) were used for a five-year, full-field monitoring project at Ormen Lange, starting in 2010. Back then, the AMTs were used to collect millions of acoustic ranges between each instrument, as well as pressure data, to monitor seafloor deformation in three dimensions. During that project, over half a gigabyte of data was uploaded wirelessly to surface vessels during eight data harvesting missions.

For this latest project for Norske Shell, starting this autumn, a number of innovations have been made, including doubling the battery endurance of the sensors to 10 years, and increased pressure sensor accuracy.

Shaun Dunn, Global Business Manager for Exploration & Surveillance, at Sonardyne, says, “We have been working closely with Shell’s geoscience teams at this field for more than 10 years and our latest technology developments have created a sensor which enables operators to continuously monitor seafloor deformation with the extremely high precision that is required for proactive reservoir management.

“Indeed, since the first trial in 2007 and subsequent full-field deployment in 2010-2016, we have doubled the battery life of our Fetch PMTs, from five to 10 years, and we’ve improved their sensitivity. Our ultimate goal is to achieve towards < 1cm per year of unresolved relative subsidence. Further advances we have made with our unique AZA (Ambient-Zero-Ambient) technology will move us closer to this goal.”

Norske Shell’s Senior Project Surveyor, Tomas Frafjord, says, “Shell has fully supported Sonardyne for over a decade in the development and improvement of seabed subsidence monitoring technologies that have been used to great effect at several of our fields. While the oil and gas industry drove these initial developments, it is very pleasing to note that they have also become a key tool for the scientific community, enabling scientists and researchers to measure movements of subduction zones and tectonic plate boundaries. This, in turn, is helping to unlock a better understanding of the earth’s dynamics and providing the information which can be used as an early warning system of potentially catastrophic events along major populated coastlines.”