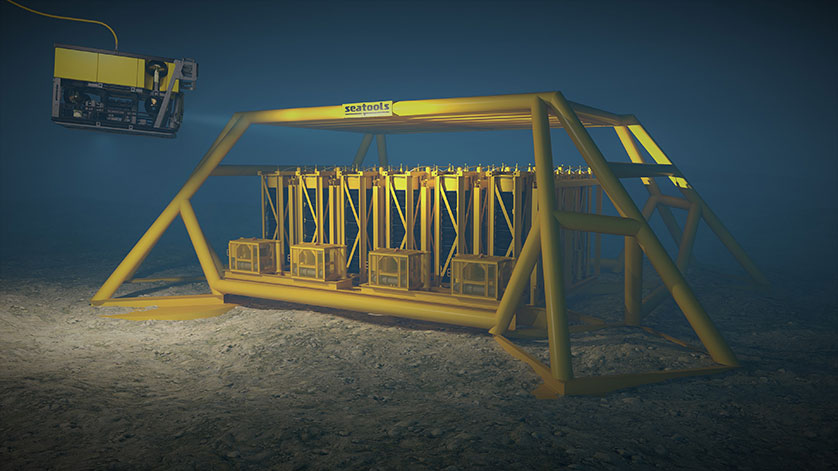 In January of this year, Dutch subsea technology company Seatools completed a R&D program on a subsea liquid storage technology.

During the program – a continuation of an earlier engineering study performed on behalf of Statoil Petroleum AS – the storage technology successfully passed a full product qualification test program. The technology will now be applied at a Pile Installation Frame operated by Seaway Heavy Lifting.

The oil & gas industry’s shift toward seabed positioning of (pressure-balanced) equipment like pumps, compressors, and related power grids that can compromise switch gear and power transformers, demands highly reliable, long-term subsea storage of (large volumes of) liquids. In addition to compensating for hydrostatic pressure, subsea storage is required to accommodate oil volume fluctuations caused by temperature changes, or may, for example, harbor control fluids. The subsea storage of liquids also is of interest to other types of equipment, such as large-volume subsea hydraulic systems with significant differential (oil) volumes caused by a large number of actuators, as with the Pile Installation Frame.

One of the decisive design criteria for a long-term storage reservoir is the reliability of the barrier between fluid and seawater. During the recently completed R&D program, ageing tests have been performed to facilitate a quantified prediction of the lifetime of the fluid barrier. In addition, a full-fledged product qualification program on a full-scale version of the reservoir, an extensive analysis of the dynamic behavior of the compensator, and a study of the pressure compensation performance under various conditions, have been performed. The successful completion of these qualification tests brought the technology to TRL 4, and will now see it applied in the field.

The R&D program is a continuation of an earlier conceptual and feasibility study into the local storage of control fluids in a subsea production control system, which was executed on behalf of Statoil. The aim of this previous study was to develop a storage system capable of providing a continuous and reliable supply of control fluids. A design lifetime of 20 years was one of the most pressing design criteria. Moreover, the study analyzed the required controls and instrumentation, refilling strategies, and related economics, and included an FMECA analysis.

In addition to gaining field feedback and continuing the development of the system’s design, additional research will be performed about the chemical compatibility of various fluids with the barrier material. Potential findings in this area are expected to widen the scope of application.