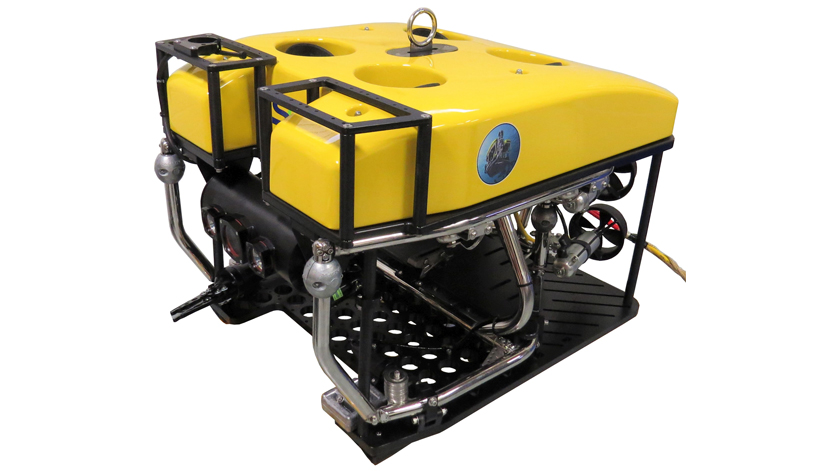 SEAMOR, producer of the very popular Chinook and Steelhead ROVs, have added a new ROV to its product line: the Mako ROV. Named after the shark, the Mako ROV shares many attributes with its namesake. The Mako is a strong and powerful vehicle, built smart, and quick. The Mako is capable of carrying 14 kg (30 lb) as a standard build, and is upgradeable to 22.5 kg (50 lb). This higher carrying capacity permits larger instrumentation (such as multi-beam imaging sonars) to be integrated.

Even with its increased payload, Mako ROVs will be able to fly at 2 knots, and offer the same easy to use and navigate ROV experience as other SEAMOR vehicles. This is thanks to the Mako's eight thrusters. Four vertical thrusters and four horizontal thrusters provide stability and maximized forward thrust.

The Mako also features a large accessory bay with an open, modular, design. This design choice provides end users ample space to mount and position accessories. The ROV has plenty of power to operate multiple accessories at once. Further, like the smaller Steelhead and Chinook ROVs, the Mako does not require any special tools to set up. This makes the Mako an ideal ROV for any task, as the vehicle can be customized easily and quickly at the job site.

“Our customers have been asking SEAMOR to build a bigger ROV that could carry heavy navigational instruments. The Mako is going to add a new dimension to our line of ROVs while maintaining the core design elements that make our vehicles so sought after” says Mr. Robin Li, SEAMOR Marine Ltd. President. “SEAMOR offers top quality technology and customer service at an incredibly competitive price point. We know that the ROV community will be very excited to see what the Mako can do.”

A standard Mako measures 840 mm x 635 mm x 674 mm (LxWxH) and weighs approximately 72 kg (160 lb). The Mako is completely compatible with the controller, power supply and tether of SEAMOR's other contemporary ROVs , making it even more affordable for returning customers to add this larger vehicle to their fleet.

The Mako ROV is available for pre-order now with fulfillment in June 2018.