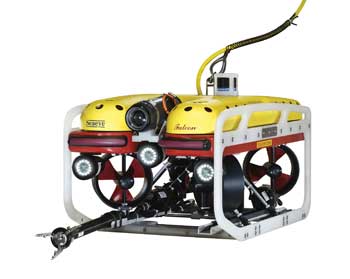 Seven orders from seven organizations in seven weeks confirms the status of Saab Seaeye’s Falcon as the world’s favorite and most successful ROV of its class, says the company, citing orders from a span of sectors including oil & gas, renewables, scientific, security, hydro and aquaculture.

Falcon – the world’s most successful ROV of its class

Its success comes from a design measuring just 1 x 0.5 x 0.6 meters that has the power and versatility to undertake many remarkable tasks with unprecedented reliability, say customers.

They quote examples where the Falcon has worked 1000 hours virtually non-stop on a salvage operation, swum five kilometers along a tunnel, carried a 4.3 meter latex shark on its back, filmed under Antarctic sea ice and carried its own weight in bolt-on equipment.

The Falcon’s winning concept comes from having packed five powerful thrusters and an intelligent distributed control system into a small, easily manhandled size.

Its power and control means it can master strong crosscurrents whilst undertaking precision tasks with steadiness and precise manoeuvrability.

Distributed intelligence means that each device on the vehicle has its own microprocessor allowing tools and sensors to be easily added or changed and custom options to be integrated – making it an ideal platform for numerous intricate and demanding applications.