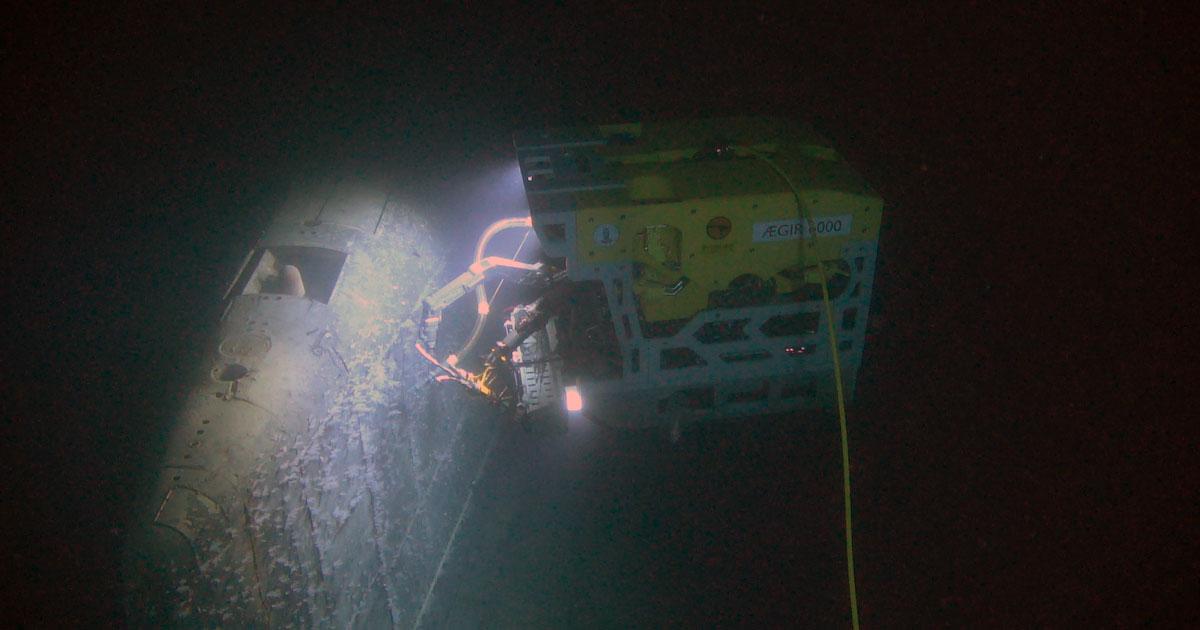 Researchers from Norway’s Institute of Marine Research have documented a leak from the wreck of the Soviet nuclear submarine, using an ROV. Several samples taken in and around a ventilation duct on the wreck of the submarine contained far higher levels of radioactive cesium than you would normally find in the Norwegian Sea. The highest level measured in a sample was 800,000 times higher than normal. However, other samples from the same duct did not contain elevated values.

“We took water samples from inside this particular duct because the Russians had documented leaks here both in the 1990s and more recently in 2007. So we weren’t surprised to find high levels here,” said Hilde Elise Heldal, the expedition’s leader.

The levels the researchers found in the sample were around 100 Bq per liter, as opposed to around 0.001 Bq per liter elsewhere in the Norwegian Sea. 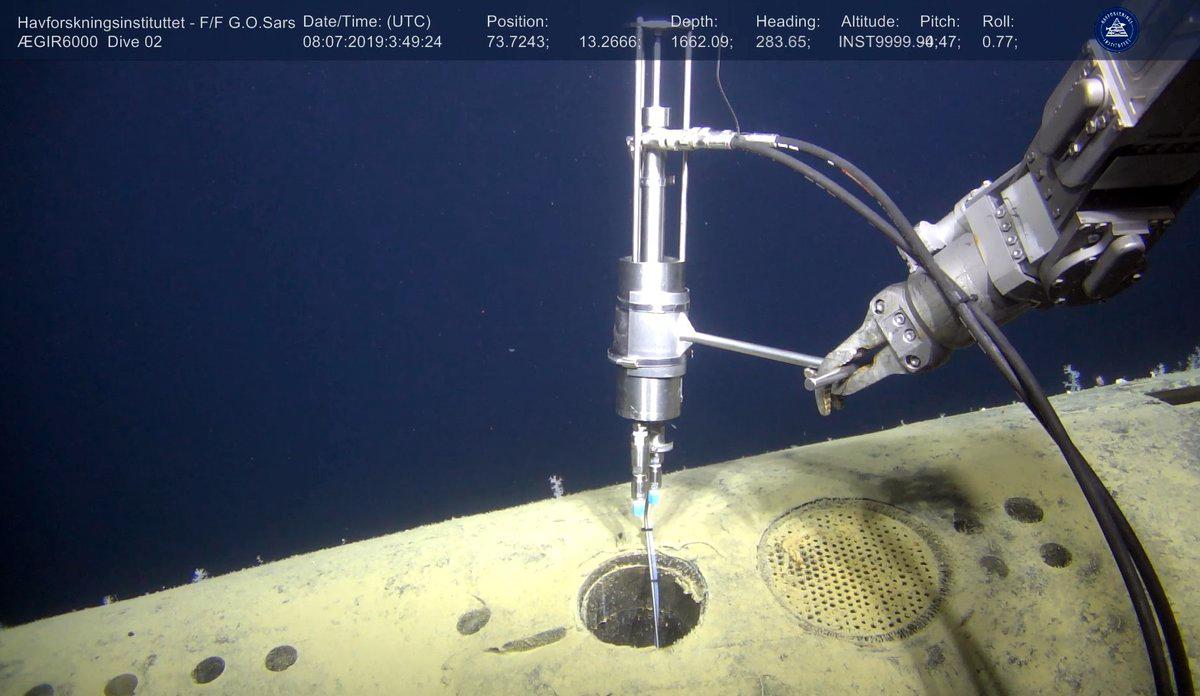 The ROV taking a water sample from the ventilation duct. Photo courtesy of IMR

Above normal, but not alarmingly high

Although that sounds like a lot, Heldal emphasizes that the levels aren’t dangerously high. She puts them into perspective by citing the permitted limit for radioactive cesium in food products:

“After the Chernobyl accident in 1986, Norwegian authorities set this limit to 600 Bq/kg”, says Heldal. “The levels we detected were clearly above what is normal in the oceans, but they weren’t alarmingly high,” explains the expedition leader.

“Over the past few days we have also taken samples a few meters above the duct. We didn’t find any measurable levels of radioactive cesium there, unlike in the duct itself”, says Justin Gwynn, a researcher at the Norwegian Radiation and Nuclear Safety Authority (DSA). 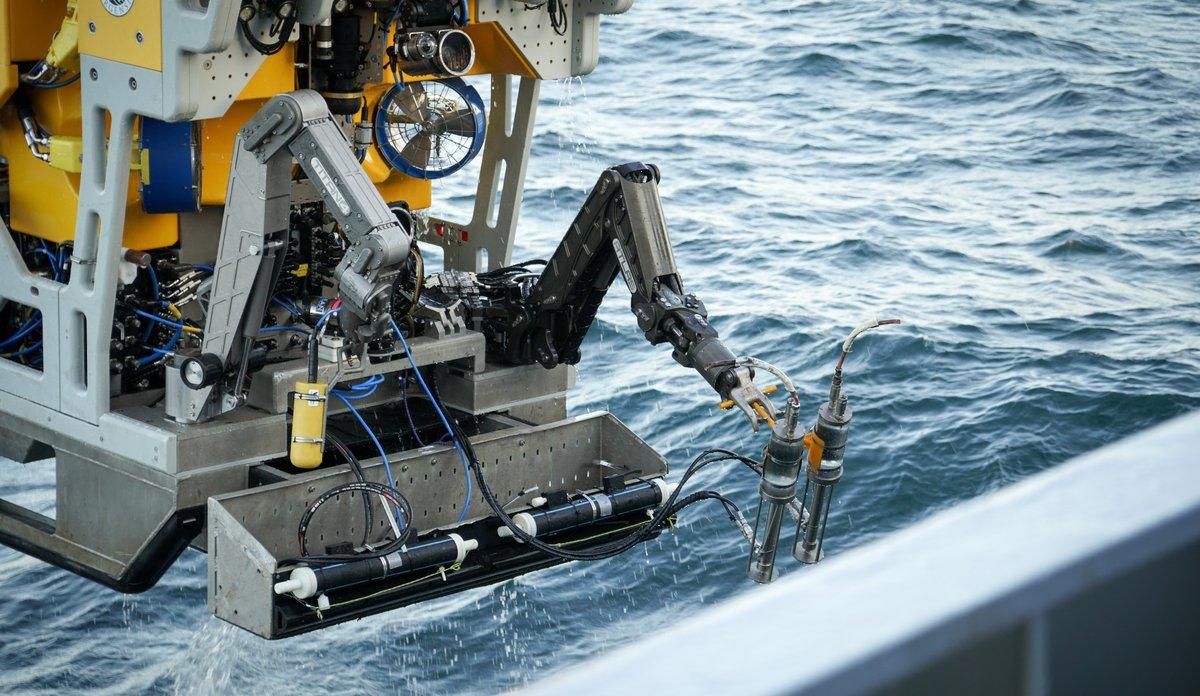 Just before taking the first sample that gave a high reading, researchers noticed a kind of “cloud” rising up from the duct. A “cloud” was also seen rising from a grille nearby, where the researchers again measured high levels. The big question is whether this “cloud” may be related to the radioactivity the researchers observed inside the duct.

“It looks very dramatic on video, and it’s definitely interesting, but we don’t really know what we’re seeing and why this phenomenon occurs. It’s something we want to find out more about”, says Justin Gwynn of the DSA. 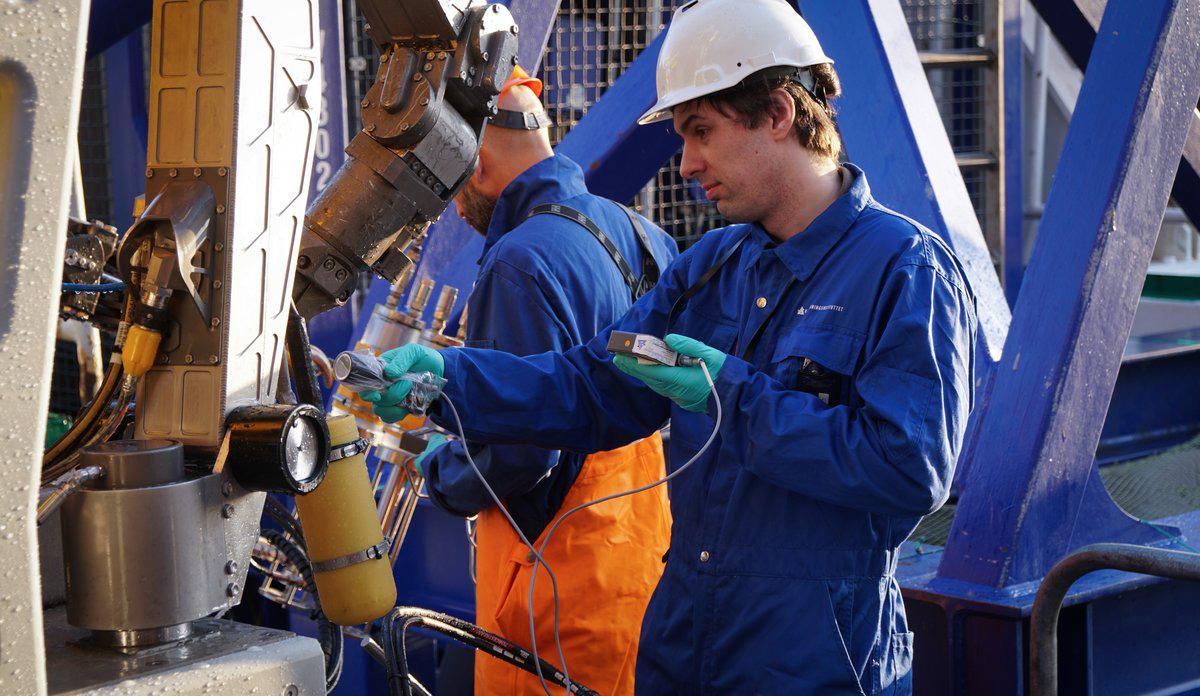 Before the water samples can be unloaded, the scientists check whether the ROV itself has been contaminated by coming into close contact with Komsomolets. Photo credit: Stine Hommedal/IMR

Located submarine at the first attempt

The research vessel G.O. Sars reached the area where the wreck was thought to be on the evening of 7 July 2019 and the researchers were quite excited to see how quickly the ROV Ægir 6000 found Komsomolets. In fact, the ROV managed to locate the wreck on its first dive. Through the ROV’s cameras, scientists were able to observe the state of the wreck with their own eyes, in real time. The ROV Ægir 6000 was designed by Kystdesign AS. 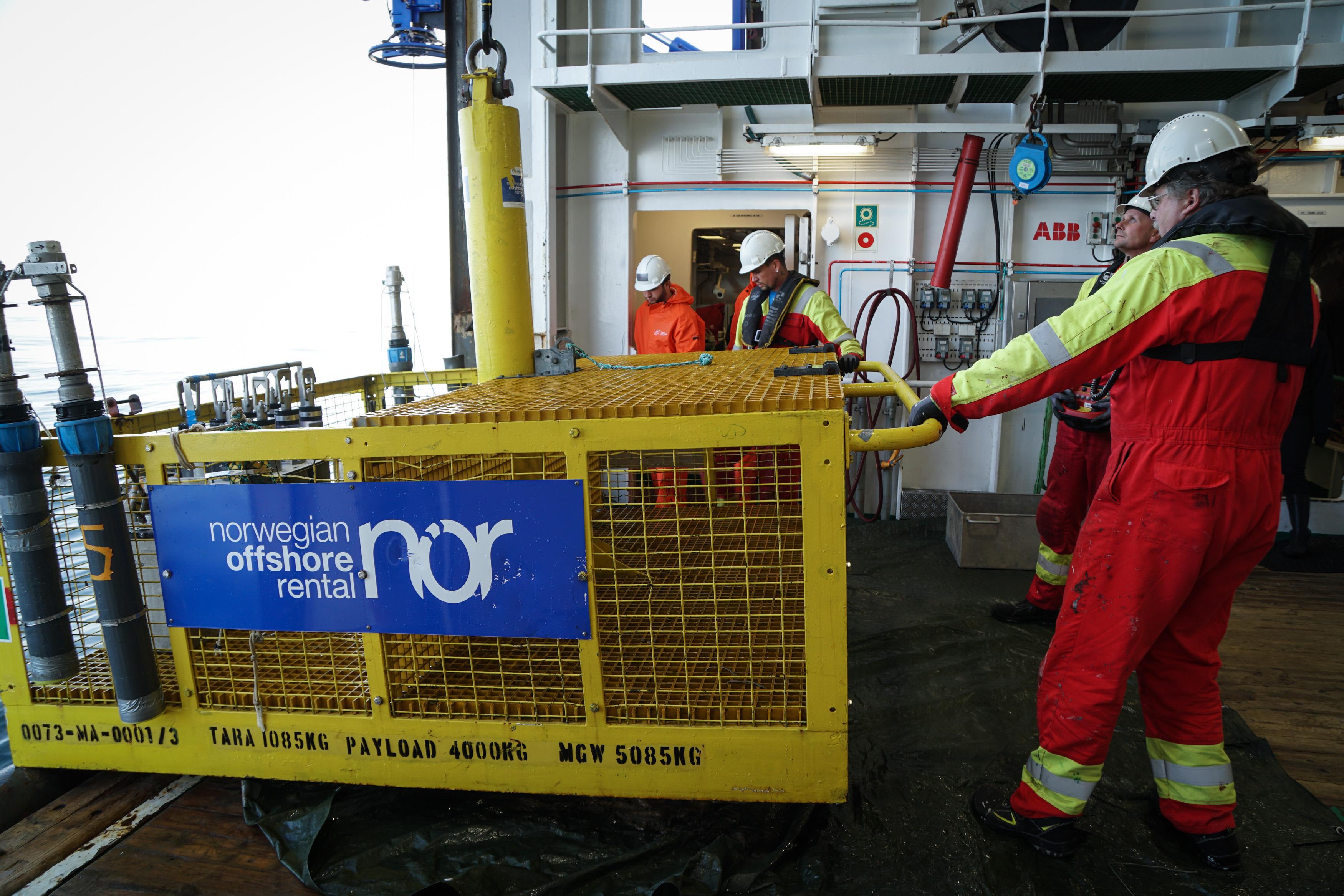 The Institute of Marine Research (IMR) and DSA have performed joint annual surveys of the wreck since the 1990s. Each year they have taken seawater and sediment samples, but without being able to “see” the wreck. Their most recent pictures of it had been taken by a Russian expedition twelve years ago. This year’s survey is the most thorough investigation of Komsomolets ever performed by Norwegian scientists.

“We have been wanting to do a survey with an ROV for a number of years. Ægir 6000 allows us to see exactly where we are taking samples around the wreck, and equally importantly we’ve been able to use its cameras to zoom in and study the whole nuclear submarine section by section”, says Heldal. 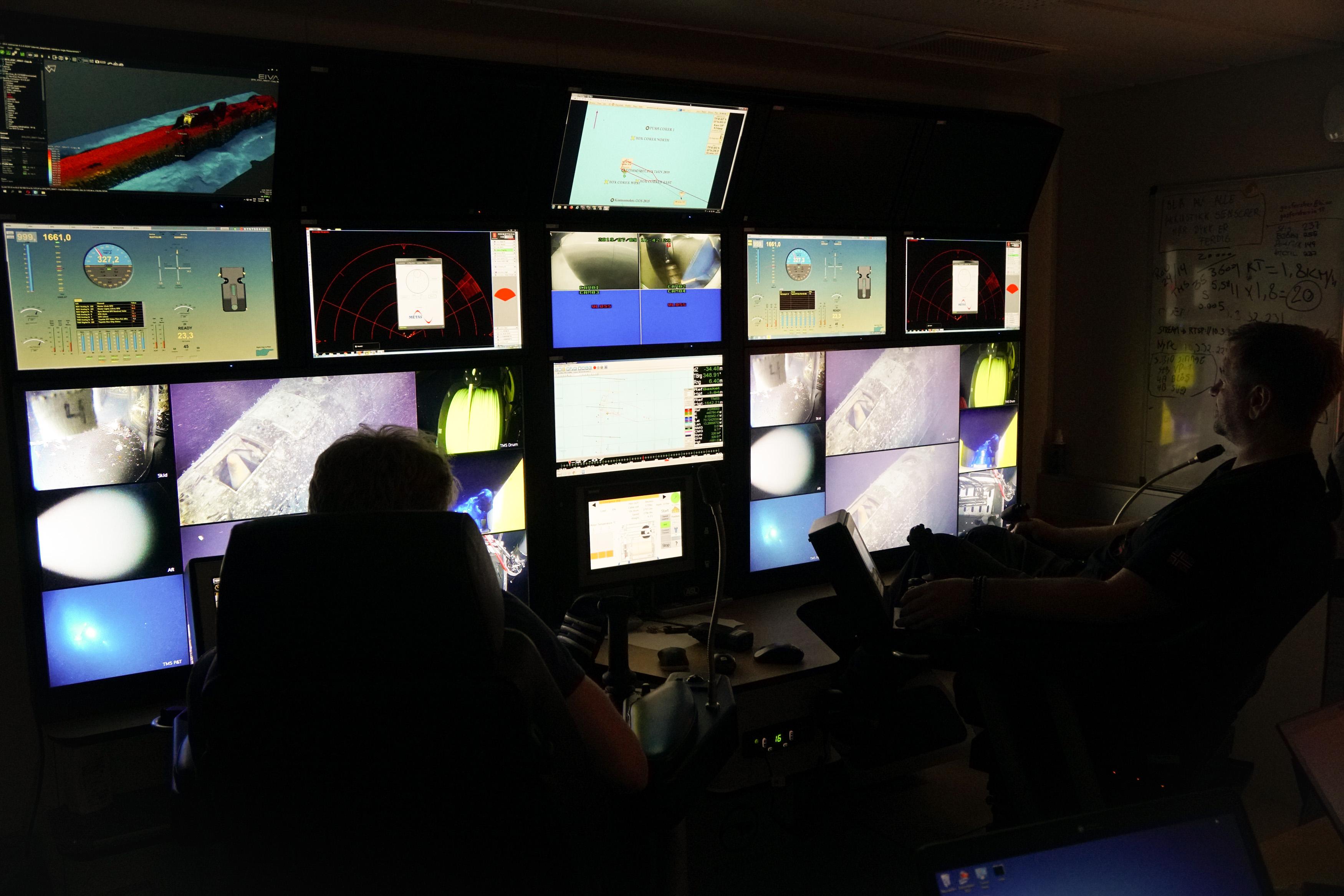 From the control room, the team controlled every tiny movement that ROV Ægir 6000 made. Photo credit: Stine Hommedal/IMR

Samples of seawater, sediment and organisms

The researchers have taken samples of seawater, sediments and organisms that have set up home on the wreck itself. The freezers and refrigerators on G.O. Sars are now full of samples that will be further analyzed later.

“We will study the samples even more thoroughly when we get home”, says Heldal.

Minimal impact on fish and seafood

“What we have found during our survey has very little impact on Norwegian fish and seafood. In general, cesium levels in the Norwegian Sea are very low, and as the wreck is so deep, the pollution from Komsomolets is quickly diluted,” explains Heldal.

The IMR has previously modelled what would happen if all of the radioactive cesium in the wreck were to leak out at once. The conclusion was that the impact on fish in the Barents Sea would be negligible, in part because there are not large fish stocks in the area where Komsomolets is located.

"This is one of several cruises the Institute of Marine Research regularly undertakes to monitor the environmental state of the oceans - this time with the top-notch technological equipment in the form of the ROV Ægir 6000. We have comprehensive programs in place to monitor environmental status and marine resources in the North Atlantic. We can follow any changes and influences in everything from large ocean systems to the seafood being served on our dinner tables. It is reassuring that the findings from this cruise do not seem to represent any danger for Norwegian seafood", says Sissel Rogne, director at the Institute of Marine Research.

Both the IMR and DSA still believe that it is vital to continue monitoring the only known source of radioactive pollution in Norwegian waters.

“We need good documentation of pollution levels in seawater, seabed sediments and, of course, fish and seafood. So, we’ll continue monitoring both Komsomolets in particular and Norwegian waters in general,” concludes Heldal.

Along with as scientists from the IMR and DSA, researchers from the Norwegian University of Life Sciences (NMBU)/Centre for Environmental Radioactivity (CERAD) and Research and Production Association Typhoon (RPA Typhoon) took part in the survey, which ended in Tromsø on Wednesday, 10 July. 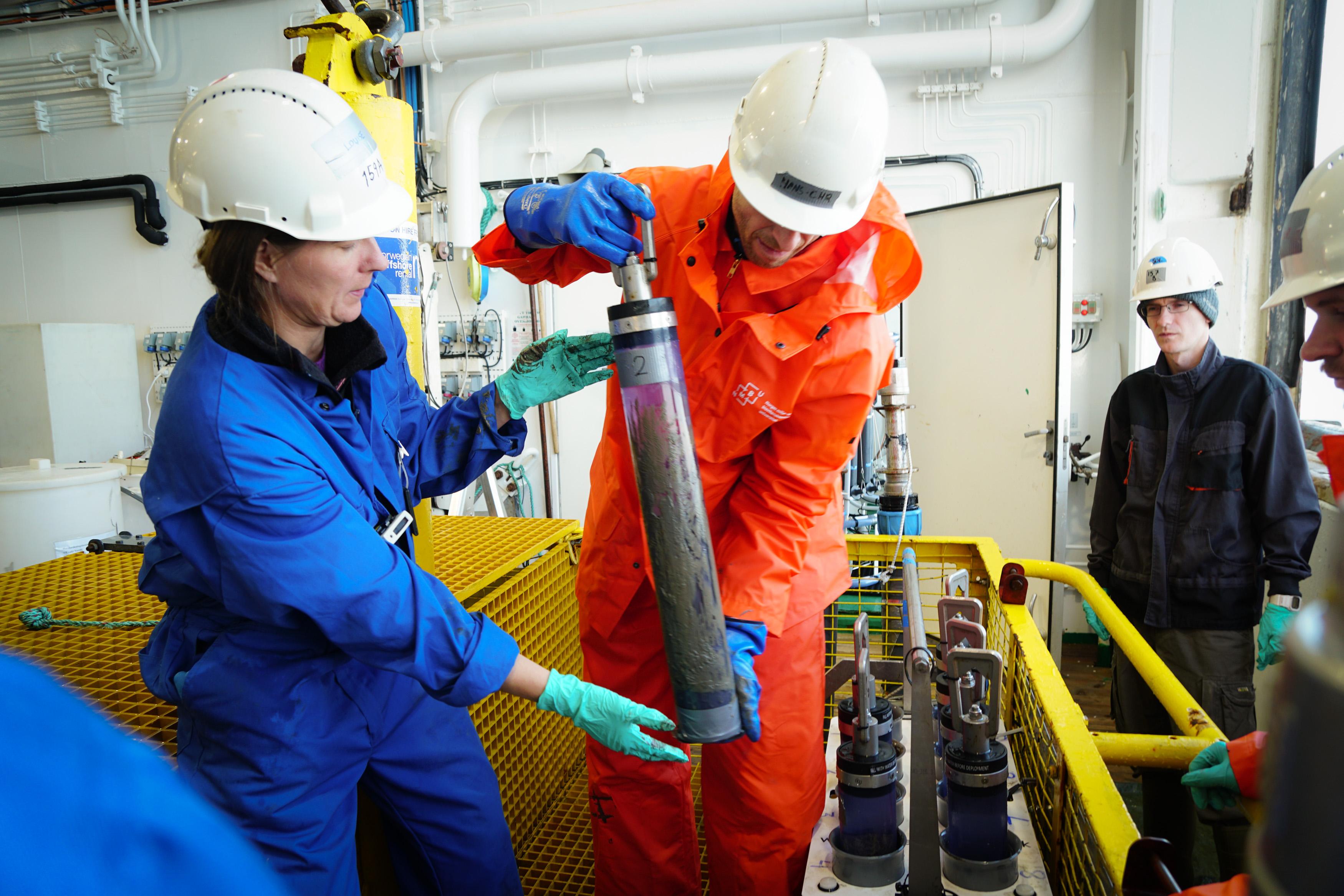 Samples from the sea bottom near the submarine wreck are brought onto the research vessel to be analyzed for radioactive substances. The samples are handled by Louise Kiel Jensen (DSA) and Hans-Christian Teien (NMBU). Photo credit: Stine Hommedal/IMR

High-tech Dives on an Ancient Wreck

Oceaneering to Provide ROV and Subsea To