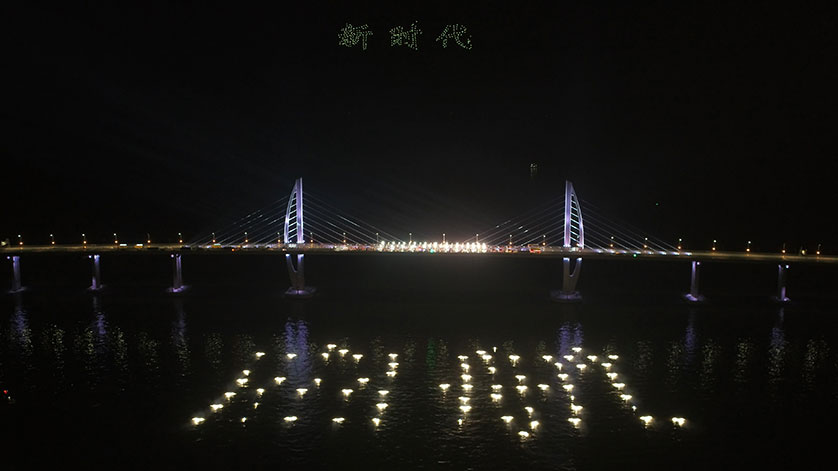 On 15 February 2018, an incredible unmanned surface vessel (USV) showcase was staged at the Hong Kong-Zhuhai-Macao Bridge, one of Zhuhai's landmarks. The newly completed bridge, which is the longest sea-crossing bridge in the world, connects Zhuhai to Hong Kong and Macao. For this celebration, however, the bridge became a spectacular background for a show of spectacular proportions.

To kick off the main event, a 7.5-meter-long lookout USV led eighty smaller (1.6-meter-long) unmanned vessels, forming a brightly lit arrow formation and traveling through the arches of the Hong Kong-Zhuhai-Macao Bridge.

Like a robotic marching band, the brightly lit vessels then formed into the Chinese word “启航” which means “set sail” and headed for the door of "the new era" made up of drones in the sky. The lights and fireworks illuminated the ocean dream of the Chinese nation. The show has foreshadowed the developing unmanned technology strength of China, which is now moving to a new era with determined steps.

This show was the first such display of multi-vessels collaboration from Oceanalpha. During the two months leading up to the performance, nearly a hundred of unmanned vessels have been produced and turn into “water dancers" via a collaborative programming effort. Simultaneously operating 81 USVs is unprecedented in the industry.

Faced with wind and rippled waves, the Oceanalpha team utilized robust and adaptive control technology to ensure smooth control of the fleet. High-precision GNSS and Integrated inertial navigation, combined with RTK technology, ensured the precise trajectory of USVs. In addition to controlling and navigating formations, the Oceanalpha team adopted a tracking algorithm based on the virtual leader combined with the path to realize formation-conversion and automatic collision avoidance of a massive number of vessels.

Oceanalpha released a statement that read, “The performance on the CCTV spring festival gala is the first in the world to achieve the massive number of USVs work together and present a spectacular show in world-class.”

"This is not just a performance, it is a tribute to future marine survey and exploration by mankind, especially the start of new technological methods in geophysical survey. In the near future, unmanned vessels will be more efficient to play its own technical characteristics, and gradually get rid of the existing 'ship + mission payload' of the traditional mode of operation, with a new payload, new methods of operation, high-density cluster collaboration in an unprecedented way to change the entire industry and extending to more industry applications. " CEO of oceanalpha Zhang Yunfei said.