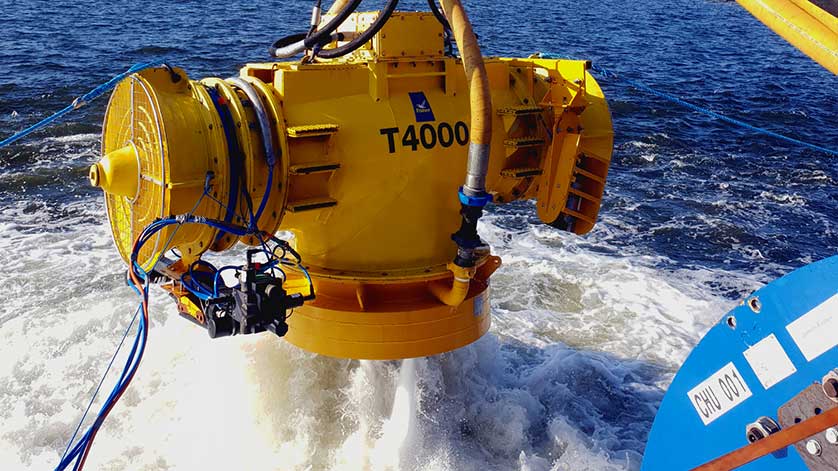 The T4000 ULD, a re-engineered version of the T4000, now offers shallow water excavation with the world’s most stable CFE system. The stability and single outlet give the narrowest, most accurate trench of any CFE system worldwide.

It was designed to meet the needs of clients seeking a more powerful, more localised trenching machine to tackle shallow water and, like the SP6000 ULD, has been developed specifically for the European offshore wind market. The first project with the new tool has just been completed off Germany.

“We are committed to constantly evolving our range, particularly in response to client requirements, a direct result of which is the T4000 ULD. We looked at the fluid dynamics and efficiencies of our equipment and have again satisfied the needs of our clients.

The SP6000 ULD was developed after clients requested a smaller CFE tool to tackle the limitations posed by cranes on some smaller shallow water vessels. JFSE has successfully completed three projects with the new tool since its introduction this year.”

The expanded range can operate in water depths from 1m to 300m, handling soils ranging from soft sand to clays with shear strength of 300kPa. Its development follows the success of JFSE’s TwinR2000 ULD. Its popularity demonstrated the need to re-engineer additional tools for more options. Both new tools will be based in the UK and European sector to service the offshore wind farm market.

“We recently marked the first anniversary of our patented jetting system, utilising unique central jets, and have also introduced a fully integrated services package, Excavation Plus, both of which are in significant demand within the industry.This enhanced range is just the latest example of our innovative approach.”

JFSE routinely works on multiple projects worldwide including pipeline and cable trenching, deburial, rock dump dispersal and seabed clearance and preparations. JFSE is the world’s leading CFE specialist. As part of the James Fisher group, it has access to bases and sister company expertise in more than 50 countries. The highly experienced management and engineering teams are responsible for the successful completion of more than 500 projects.