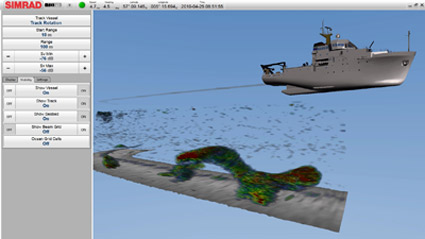 Kongsberg Maritime has unveiled an advanced new technology platform at the ICES Working Group on Fisheries Acoustics, Science and Technology (WGFAST) in Vigo on 19th April, which enables live streaming of 3D data generated by scientific multibeam systems. The unique, new Simrad TD50 data visualization software is currently operational with the Simrad ME70 scientific multibeam echo sounder, with plans to enable 3D data streaming from a wider range of Simrad acoustic systems in the future.

The Simrad TD50 software reads the incredibly clean raw data from the ME70 in real time and delivers accurate live visualization of the ocean space beneath the vessel to the scientific lab on board and to the bridge. Previously the data had to be post-processed before the 3D potential of the system was realized, but with a live feed now available, researchers and vessel crews benefit from a new highly effective decision support tool that can enhance vessel efficiency and the effectiveness of scientific surveys in general.

Accurate 3D visualization gives users a better understanding of the marine ecosystem by i.e. enabling precise measurement of schools of fish rather than estimating size and shapes based on models. Additionally, 3D view of bottom topography and the relating bottom habitats further enhances the understanding of the marine ecosystems. When accurate 3D visualization is delivered in real-time, the benefits are significant. The Simrad TD50 system is especially relevant to projects using ‘adaptive sampling, as the live 3D stream of the survey area enables researchers to see specific attributes as the vessel passes over them, allowing action for further inspection to be taken immediately.

The live 3D stream from the Simrad ME70 data can be delivered to multiple locations on board which allows for better interaction between scientists and the vessel operators, typically important in demanding operations where the vessel interacts with objects in the water column. Research vessels engaged in active sampling of biology such as trawling can also improve their capabilities, with the Simrad TD50 system effectively providing a ‘long range camera’ below the surface.

The ME70 is a calibrated system with extremely low noise data, making it possible to map very small targets, such as plankton layers, at the same time as strong targets, such as fish school or bottom. The ME70 has been adopted by several key research organizations worldwide including France’s Ifremer on board 'L'Europe' and ‘Thalassa’, and Norway’s Institute of Marine Research (IMR) on board the new ‘Kronprins Haakon’ Research Vessel. The latter is equipped with an extensive suite of KONGSBERG systems for research vessels, including the full range of scientific equipment for marine ecosystem assessment.

“The Simrad TD50 has been a fantastic story,” said Tonny Algrøy, Global Sales Manager, Simrad Fishery Research, Kongsberg Maritime. “Real time 3D visualization of massive data like this was said to be impossible only years ago, but with help from Kongsberg Digital’s 3D center of excellence we have now upped the ME70 capabilities to a new level. Research vessels can now react immediately to changes in the environment they study, which is a facility that has the potential to create a positive step-change in the way scientific surveys are conducted.”

Video of the Simrad TD50 in action on board Kongsberg Maritime’s test vessel Simrad Echo, in the shallow sand eel grounds in southern part of the North Sea. As the ME70 has much greater depth capabilities than shown in this data set, the true power of the combined system will be even more evident in deeper waters.