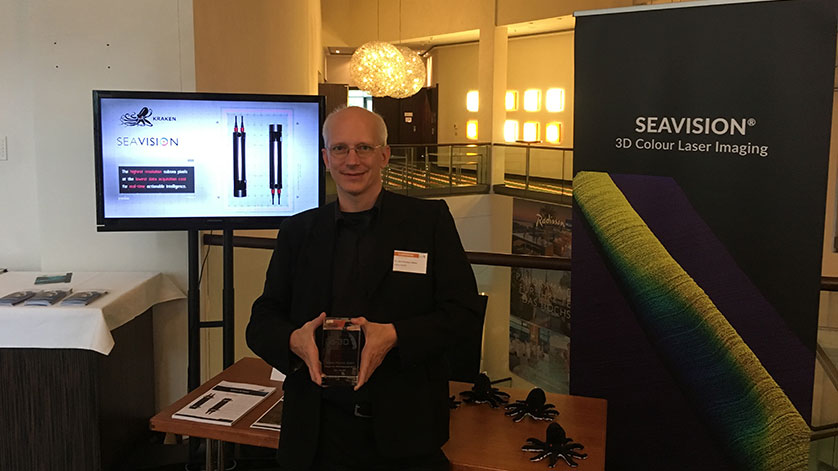 Kraken Sonar Inc. announces that its subsidiary, Kraken Robotik GmbH was recently awarded the Go-3D prize for Kraken's SeaVision™ system. The Go-3D award was established to recognize outstanding technical achievement in the field of 3D visualization. It was presented by the Fraunhofer Institute for Computer Graphics Research in association with BITKOM, the German Association for Information Technology, Telecommunications and New Media.

SeaVision™ is the world's first full-color, 3D laser underwater imaging system. Equipped with a high-resolution camera and laser, the system allows users to reconstruct objects on the seabed in such a way that detailed models can be subsequently produced for 3D visualization.

Dr. Jakob Schwender, Managing Director of Kraken Robotik GmbH said, "We're very honored to accept this award. Modern technologies for the acquisition, processing and visualization of 3D data have become an increasingly important issue for the design, production and operation of industrial projects. This applies in particular to the underwater maritime industry with its specific requirements for 3D reconstruction."

The SeaVision™ system can perform a wide range of underwater inspection tasks with remarkable results. Its 3D imaging capabilities include generation of geo-registered "as-built" models of structures on the seabed or in the water column, survey of subsea infrastructure and comparison against baseline models and detection of structural defects or other out-of-spec conditions that exceed threshold values. When the SeaVision system is combined with an Autonomous Underwater Vehicle, the resulting cost efficiency and accuracy of inspection will exceed anything available today.

SeaVision™ was introduced to the marine technology industry in March 2017. Commercial units will be available for delivery during 4Q 2017. Pricing for a complete system will be US$75,000.