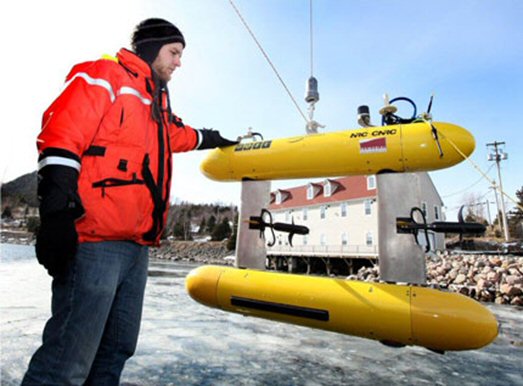 "We believe that the ocean drone market is at an inflection point and set for major growth," said Karl Kenny, President and CEO of Kraken. "This acquisition brings us a significant underwater technology and IP portfolio and continues to build on our sensors-to-systems strategy to be a market leader in the Unmanned Maritime Systems industry."

Included in the assets acquired are: all underwater robotics technology, intellectual property and related physical assets -- including an operational SQX-500 Unmanned Underwater Vehicle (refer to the section below for more details). In addition, the majority of the senior electrical, mechanical and software engineers that were previously employed by Marine Robotics Inc. are now Kraken employees.

"Military and commercial operators are starting to significantly invest in this market as the cost of utilizing drones is much less than conventional manned platforms," said Mr. Kenny. "The acquisition of Marine Robotics' technology, physical assets and intellectual property is a great accelerator for Kraken. Kraken is making a significant investment in underwater robotics technology with developments such as our recently announced KATFISH intelligent towbody platform. This acquisition will help support the growing needs of our military and commercial clients."

Marine Robotics Inc. ceased operations following the receivership of its parent, Marport Deep Sea Technologies Inc. During its existence, Marine Robotics Inc. invested several million dollars in the development of unmanned technology and contributed to building a world-class ocean technology capability in St. John's, Newfoundland. The company had extensive collaboration with Canada's National Research Council -- Institute for Ocean Technology, the Marine Institute, the Autonomous Ocean Systems Laboratory at Memorial University and many international partners. Newfoundland and Labrador has become a centre of expertise in ocean technology and Kraken will continue to contribute to growth of the sector.