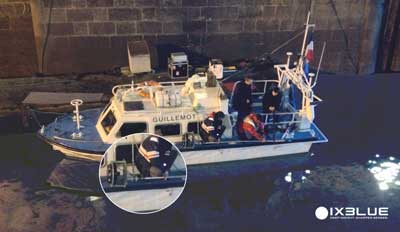 SHOM has awarded iXBlue with a 4-year contract to equip their coastal hydrographic vessels and smaller hydrographic crafts with ECHOES sub-bottom profilers.

Sub-bottom profiling in shallow water always proved to be challenging for a few reasons. First, the profilers are usually towed bodies that are difficult to use when survey lines are short, U-turns are frequent and water-depth is limited. Additionally, commonly used small vessels limit the acceptable size of survey equipment. iXBlue ECHOES 3500T3 and 10000 models are selected as they excel in these challenging environments: they are very compact and purpose-fitted for pole-mounted and hull-mounted installations.

Seeking to extend its sub-bottom profiling capacity in coastal waters and on the continental shelf, SHOM was looking for cost-effective, compact and versatile equipment. They conducted an extensive evaluation of industry leading products, giving iXBlue an opportunity to demonstrate ECHOES capabilities.

ECHOES 10000 was demonstrated onboard SHOM 7-meter coastal hydrographic vessel. Its compact design made the integration onboard easy, transducer fitted on the single-beam echo-sounder pole. ECHOES topside unit, of a standard computer size, was racked onboard and the system was ready within minutes. DELPH software was used to gather all sub-bottom, positioning and motion sensor data. ECHOES superiority over competition was demonstrated across parametric sub-bottom profilers (higher primary frequency). On top of being highly compact, they are able to operate with the multibeam echo sounder without interferences or the need for synchronization.

ECHOES 3500T3, using wide-band and low-frequency chirps, also proved its capability to achieve smart penetration and resolution in sediment. This versatile profiler outperforms sparkers and boomers when both power and resolution matter.

SHOM purchased multiple units of each model, including detachable gondolas so systems could be shared between vessels. “We decided to select iXBlue sub-bottom profilers for our hydrographic crafts and vessels for the high data quality on tested systems in different natures of sediment and also for the facility of deployment and compatibility with other onboard hydrographic sensors such as multibeam echo sounder or side-scan sonar which led us to save time”, said Yann LE FAOU, SHOM Senior Sedimentologist.