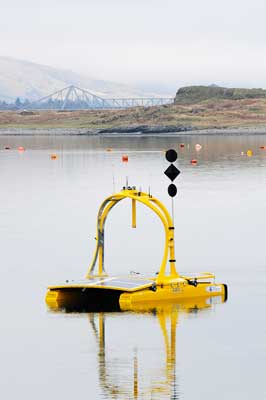 Researchers from the University of Exeter have used the ‘ideal’ Argyll coastline to test a new sea-going robot that can map the seabed using its own intelligence.

Professor Peter Challenor from the College of Engineering, Mathematics and Physical Sciences and his team came to the Oban-based Scottish Association for Marine Science (SAMS) to test a computer algorithm that allows the autonomous surface vehicle, to collect data at sea without any human intervention.

The robot, a C-Enduro model produced by ASV Global, is the size of a small car, is powered by solar and wind energy and has the capacity to travel at sea for up to three months over a range of 4,000 miles. It has a self-righting hull and has been built to operate in all marine environments.

The team spent a week at SAMS’ Dunstaffnage base and in Ardmucknish Bay, near Benderloch and praised the testing ground available through SAMS’ Scottish Marine Robotics Facility (Scot-MRF).

Trials officer John Holmes, a former Royal Navy hydrographer with more than 30 years’ experience, said: “We had a very successful trial and the location has been an important part of that. In researching locations for this exercise I noticed that there is guaranteed shelter in easy-to-access coastal spots and inshore lochs, offering a variety of depths.

“We have not lost any trial time because of weather; the sheltered areas mean any tidal or weather effects are minimal.”

The C-Enduro has the potential to dramatically reduce the cost of data collection by removing the need for traditional survey vessels and researchers believe it may produce more accurate data.

“This has been designed for gathering data at less cost and will be useful to the offshore industry and in scientific research,” said Professor Challenor. “We are hoping that once our algorithm has been tested we will be able to license this technology and convince people to start using it in earnest.”

SAMS Knowledge Exchange Fellow Fraser Macdonald, who hosted the team from Exeter, said: “I am glad that the team had a successful trial, as the C-Enduro is an exciting addition to the UK’s national capability in marine research.

“We operate a range of marine robotics at Scot-MRF but the facility also offers the ideal testing ground for other platforms, given the variety of marine environments.”

The project is a collaboration between Exeter University, the Met Office and Marine SouthEast, a not-for-profit organisation working in the marine sector. The C-Enduro is part of the UK’s Marine Autonomous and Robotic Systems (MARS) group, funded by the Natural Research Council.