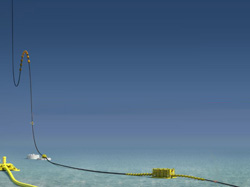 Nexans is developing a Direct Electrical Heating (DEH) system in waters up to 2,300 metres deep to maintain the flow for subsea production pipelines serving a major development in Brazil

A Brazilian oil company has selected Nexans for a FEED (Front End Engineering & Design) contract to deliver a complete Direct Electrical Heating (DEH) system for the subsea pipelines serving an offshore field development. This latest project continues Nexans’ long track record in the engineering and delivery of complex subsea umbilicals and accessories for major projects as Brazil makes the transformation from energy importer to energy exporter.

The study contract applies to oil fields located off Brazil’s coast in water depths up to 2,300 metres.

As part of the contract, Nexans will deliver a complete DEH system, including Topside Power Supply, Riser Cable, Piggyback Cable and all associated accessories for the connection and installation of the pipelines that will connect the subsea facilities with the FPSO (Floating Production Storage and Offloading) vessel. The development will be the world’s deepest DEH system, going around 1,000 metres deeper than Nexans’ current Lianzi project offshore from the Republics of Congo and Angola.

Direct electrical heating (DEH) is a technology for flow assurance, developed to safeguard the wellstream through the pipeline to the platform. The method is based on controlling the temperature of the pipeline by passing electric current (AC) through the steel wall of the pipeline, thus preventing hydrate and wax formation. The DEH System limits the need for chemical injection, pressure evacuation or other flow assurance methods that might have environmental or operational challenges. DEH allows the pipeline to be operated in a cost efficient and environmentally safe manner.

Nexans has pioneered the development of DEH technology in partnership with Norwegian operators and research organisations. Over the last 15 years Nexans has developed significant subsea system technological competence and analysis capability in-house.

“Nexans has a long track-record in Brazil with the delivery of several deepwater steel tube umbilical projects over the last 15 years. This latest collaboration with a Brazilian oil company is further confirmation of Nexans’ position as the prime supplier for the development of DEH Systems,” says Bård Viken, Sales & Project Manager, Nexans. “Over the past 15-20 years, Nexans has supplied 9 out of the 10 DEH systems in operation worldwide, is in the process of delivering and installing DEH systems for the Lianzi project in the Republics of Congo and Angola as well as for the Shah Deniz project in Azerbaijan."