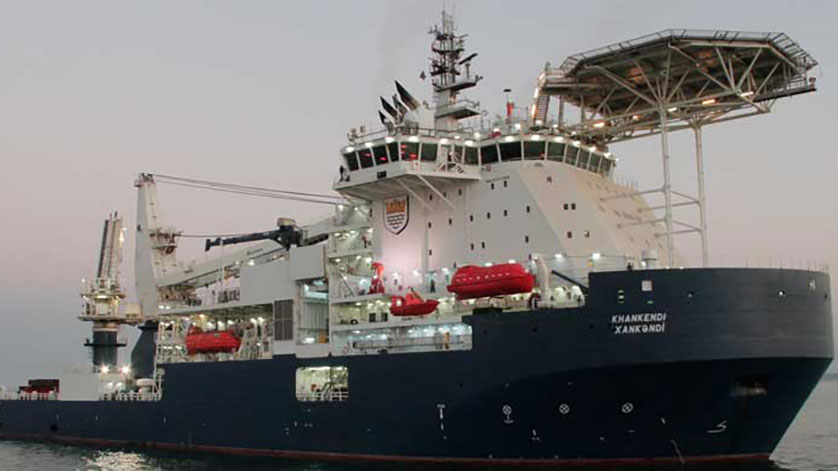 The Shah Deniz consortium has announced the launch of the Khankendi - a new flagship vessel for the Caspian. The state-of-the-art subsea construction vessel has been specifically designed and built to install the biggest subsea production system in the Caspian Sea as part of the Shah Deniz Stage 2 project.

The official inauguration of the new $378 million vessel took place in Baku in an event which was attended by H.E. President Ilham Aliyev of the Republic of Azerbaijan.

The Khankendi will now be deployed to the Shah Deniz field where it is expected to perform subsea installation and construction work over the next eleven years.

Gary Jones, Regional President for Azerbaijan, Georgia and Turkey for BP, operator of the Shah Deniz consortium, said: “We are proud to deliver this complex and truly multi-functional vessel, capable of installing the latest subsea production technology in the Caspian as part of the giant Shah Deniz Stage 2 project. This is another great milestone for Shah Deniz, achieved in cooperation with a local service company, and we look forward to the essential support the Khankendi will provide. I would like to thank the Baku Shipyard and all other parties whose efforts have been key to delivering this unique vessel safely and efficiently.”

The vessel is 155 meters in length and 32 meters in width with 2000 square meters of deck space. It has a total weight of 17,600 tonnes, a carrying capacity of 5,000 metric tonnes at 6.5 meters draft and two engine rooms with 6 x 4.4MW and 2 x 3.2MW generators. It is equipped with dynamic positioning to allow working in 3.5 meter significant wave height, a 900-tonne main crane capable of placing 750 tonne subsea structures down to 600 meter below sea level, an 18-man two-bell diving system, two work-class ROVs and a strengthened moon pool. The Khankendi can carry out complex activities without the need for anchors.

The vessel has a maximum capacity of 175 people on board, including the marine crew and discipline specialists. The personnel include both Azerbaijani nationals and expatriates with plans for extensive training, leading to the full nationalization of the staff.

The Khankendi has been designed and built by the Baku Shipyard - a joint venture of SOCAR, the Azerbaijan Investment Company (AIC) and Keppel O&M.