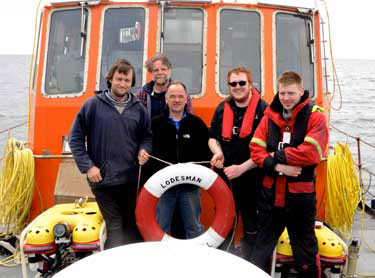 A secret mission to persuade Tsar Nicholas II of Russia to stay in the First World War failed when Britain’s Secretary of State for War Lord Kitchener and over 700 sailors died in the sinking of the warship HMS Hampshire after it hit a mine off the Orkney Isles.

100 years later a Saab Seaeye Falcon underwater robotic system operated by Roving Eye Enterprises examined the wreck in a collaborative project that includes the University of the Highlands and Islands Archaeology Institute, with licensed permission from the Ministry of Defence.

Keith Bichan (center) and some members of the survey team

Sandra Henry, a marine archaeologist from the Institute said that the remote survey has provided many new insights into the sinking and wreck of the HMS Hampshire, adding that ongoing work will continue to develop the knowledge base, revealing new information as they continue to gather and process data.

Although there have been two previous surveys of the ship, this is the first extensive mapping of the wreck site since it sank.

Roving Eye Enterprises, based in the Orkney Isles in the far North of Scotland, were chosen for the project because of their long experience at working in demanding sea conditions whilst undertaking precision filming and survey tasks. 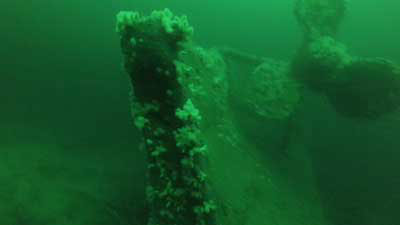 Stern of the vessel showing the portside bronze propeller

During the mission they deployed the Falcon with its low-light camera and a Nexus advanced ultra short baseline position and tracking system designed to locate subsea targets through acoustic signals.

The tracking system was provided and operated by Triscom Marine, a specialist survey company who, together with Roving Eye, provided their services free for the commemorative project.

The survey confirmed previous findings that the ship capsized and sank following an explosion between the bow and the bridge, and lies upturned on the seabed in approximately 60m of water. The hull is also damaged in places throughout the length of the vessel, exposing parts of the interior.

Guns from the ship’s secondary armament were identified at a distance of up to 30m from the main body of the wreck. The location of these breech-loading 6-inch MK VII guns may be related to the sinking event or salvage activity.

“Having operated the Falcon for over 10 years now,” says Keith Bichan of Roving Eye; “the survey of the Hampshire reinforces my belief that I made the right choice when I purchased my first Falcon. Power, versatility and reliability are still the key factors that make it the leader in its class.”

A ceremony marking the loss of lives was held at the Kitchener memorial located on the headland point off where the Hampshire sank a century ago.

US Challenges Russian Claims in Sea of J

US Navy and Allied Nations Participate i

Australian WWII Shipwreck Found After Be