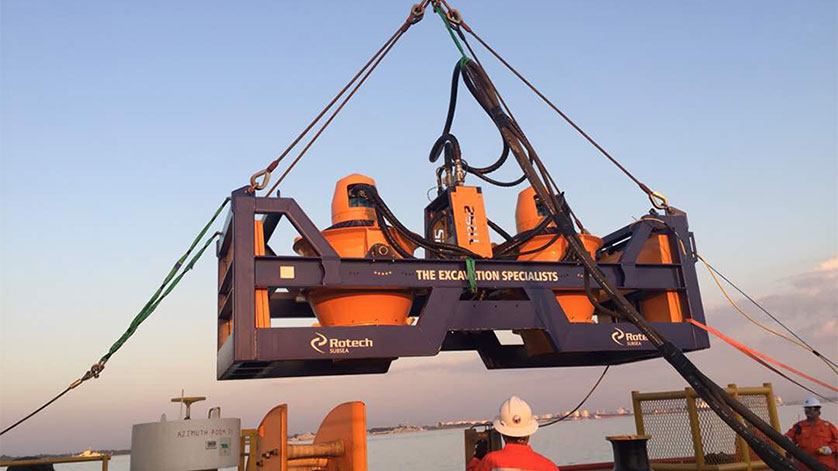 Rotech Subsea Ltd have been active in Asia, the Americas and beyond to meet a growing worldwide demand for their cutting-edge trenching, excavation and cable grab tools.

Having hired respected freelance excavation specialist, Stephen Sin, as Asia team leader of Rotech Subsea, attention recently turned to the Yangon field (Myanmar) where the company answered the call from Pathfinder to mobilise their TRS2 tool at very short notice for a critical export pipeline project for MOGE.

At time of going to press, Rotech Subsea were set to sail from Singapore to Yangon field for a 2-3 week major seabed freespan correction scope of work on the biggest export pipeline into Yangon. This priceless project for Myanmar on the 24 inch live pipeline saw Rotech Subsea contracted due to the team’s expertise and experience in the area and - with accuracy critical due to the freespan’s range from 0.1 up to 0.7m - due to the TRS2’s unrivalled power and controlled flow.

This major contract award was a coup for Rotech Subsea, which is establishing itself as the global partner of choice for trenching, excavation and freespan correction. MOGE’s choice to ship the TRS2 and Rotech Subsea Team all the way from the UK to complete this project emphasises the growing awareness of Rotech’s capabilities round the globe.

Speaking about the recent foray into Asia, Director of Subsea, Stephen Cochrane, said: “We have made the commitment of employing Stephen Sin to meet the demand of project work in Asia. Stephen brings decades of offshore project experience and the region and will head up the valued MOGE campaign.

“As has happened in Europe, Rotech Subsea have subsequently received numerous enquiries from prospective clients about mobilising the TRS2,” added Cochrane. “We have consequently made the decision that the tool will remain in-country to meet rising demand.”

Rotech Subsea have also announced that they have established a new trading entity in Ciudad de Carmen, Mexico. Building on a 15-year track record in the region, Rotech will be servicing the market with the next generation of RS technology tools.

Rotech Subsea may have over two decades of experience at the forefront of mass and controlled flow excavation, but recent successes have proven the company’s reputation for always innovating and adapting to service new and established markets and satisfy new and existing clients.