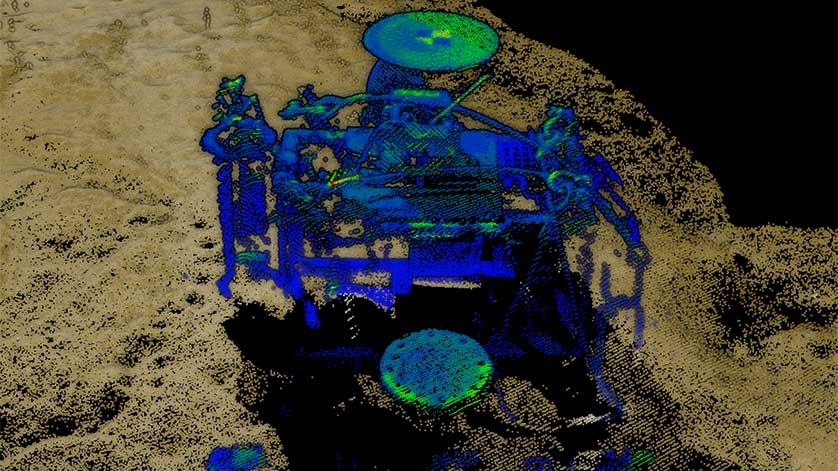 Historically, metrology campaigns using Long BaseLine (LBL) acoustics and photogrammetry have demanded significant vessel and ROV time. Additionally, LBL requires physical interaction with the subsea assets and photogrammetry is unable to provide real-time results. The goal of the demo was to quantify the reduction in operational time and increased accuracy of dynamic laser scanning for subsea metrology.

Two structures each containing four flanges were placed on the seafloor with an approximate baseline distance of 18m. The control measurement for the analysis was established by an LBL acoustic technique with flange orientations provided by installed gyro frames.

A Triton XL ROV was fitted with complete dynamic survey solution from 2G Robotics and Sonardyne. The ULS- 500 PRO was mounted at 30° to capture the side facing hubs, upward facing hubs, and seabed in a single scan pass over the 18m baseline. With each scan run taking only 4 minutes, the ROV performed multiple redundant runs from structure-to-structure at an altitude of approximately 3m.

The data was transmitted to the surface in real-time, processed through EIVA navigational software, and then through DOF’s Metro Prep software for automated metrology analysis. From these high-resolution point clouds, exact measurements were taken to facilitate the fabrication of spools and jumpers while concurrently providing as-built condition assessments. The measurements of the vertical jumper metrology and the horizontal spool metrology were within accepted industry tolerances.

Overall, DOF Subea is extremely pleased with the quality of results and performance of 2G Robotics’ ULS-500 PRO and Sonardyne’s SPRINT systems, stating, “[Dynamic Laser Scanning] has revolutionized the capability to perform mobile metrology operations in a timescale previously unattainable.”