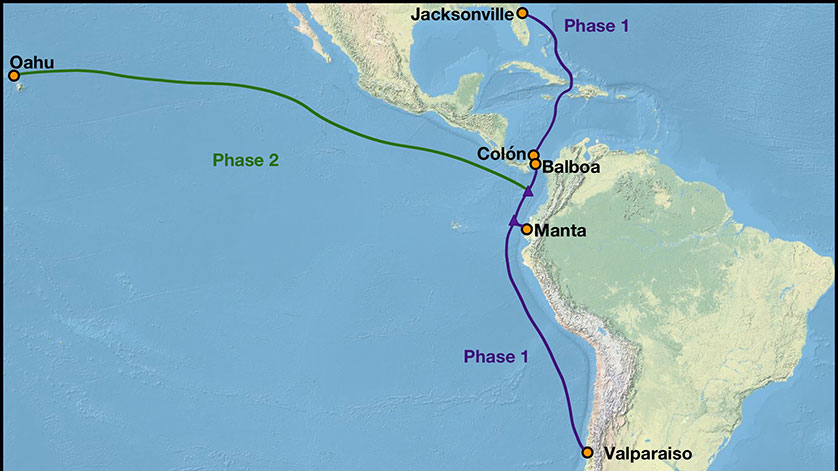 Ocean Networks, Inc. and Ocean Specialists, Inc. (OSI) announced that they have entered into an agreement for the further development and implementation of the South America Pacific Link (SAPL) Submarine Cable Network.

The SAPL Network is being developed in two phases, with Phase-1 connecting Valparaiso (Chile), Manta (Ecuador), Balboa (Panama) and Jacksonville (Florida), and Phase-2 extending the network to Hawaii, where it will interconnect with Asia and Pacific networks, creating a much-needed direct connection between those key traffic points and the west coasts of Central and South America.

Ocean Networks has received interest in the project from investors, carriers, governments, content providers and suppliers who recognize the benefits of a next-generation network connection between these emerging markets.

Scott Schwertfager, CEO of Ocean Networks, commented, “The SAPL system addresses the need for direct, carrier-neutral network capacity between regions that are growing exponentially. Our ability to fulfill significant capacity requirements, at wavelength and fiber levels, is unique on this route and will serve the needs of our customer community well.”

OSI will provide full turnkey network development services to Ocean Networks, beginning from the current financing stage and continuing through implementation to network operations. “We are extremely pleased to be working with Ocean Networks to fully develop this important project. We are strong believers in the global networking need for the SAPL system, as well as in the management team at Ocean Networks who are leading the effort,” said Jim Byous, President of OSI.

“Since commencing the SAPL project, Ocean Networks has successfully addressed critical components such as future technology, service capabilities and key supplier relations to bring the best alternatives to our project. OSI, with their history of successfully developing global subsea networks, bring the technical and management capabilities needed for full implementation,” said Mr. Schwertfager.

The SAPL Network planned ready-for-service date of Phase-1 is early in 2019.