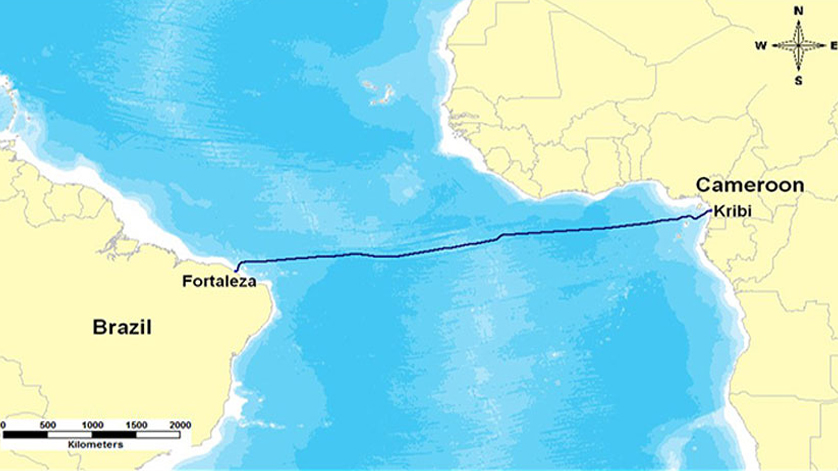 Work on a new South Atlantic fiber optic cable system connecting Cameroon and Brazil is underway following the signing of a construction and maintenance agreement (C&MA) in August.

The new system, known as the South Atlantic Inter Link (SAIL), will be undertaken by Huawei Marine for China Unicom, the world's fourth largest mobile service provider by subscriber base, and Camtel, the national telecommunications and Internet service provider in Cameroon.

SAIL is a 6,000 kilometer system that will run from Kribi, Cameroon, to Fortaleza, Brazil. It will have a capacity of 32 Tbit/s and will help establish Cameroon as a major transit point for African-South American traffic.

The new cable system also will help meet the growing demand for affordable Internet access in Cameroon. Following the government’s award of the first 3G license at the end of 2012, demand for mobile broadband and other data services for both personal and business usage in Cameroon has grown considerably. The country’s infrastructure has struggled to keep up with demand, especially on the international submarine cable side, where capacity was restricted to a 10 Gbit/s data flow to Europe via WASC/SAT-3.

Camtel has been working to add more capacity to alleviate this bottleneck. The company has partnered in the Nigeria-Cameroon Submarine Cable System (NCSCS), which was completed at the end of last year. SAIL, which will be ready for service in the early of 2018, will add a vast amount of additional capacity at a time when demand in Cameroon is likely to skyrocket due 4G mobile phone services take hold.

Africa is the fastest growing market for international bandwidth in the world. Capacity prices, however, remain high. The price for a 10-Gbit/s wavelength between Africa and the United States can be as high as US$700,000 per month, compared to US$35,000 per month for the same wavelength from Miami to Sao Paulo. SAIL will help to bring Africa-Americas prices down thanks to the large amount of new international capacity it provides. It also will add route diversity for African Internet traffic, allowing it to reach the United States through South America, rather than through Europe as the existing cables are routed.