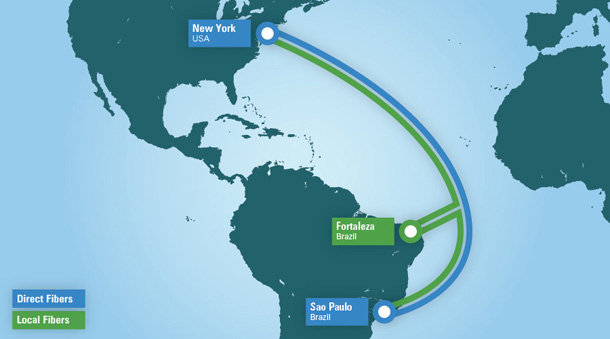 Seaborn Networks has announced that Coface, the French Export Credit Agency, has issued, for the account of the French State, a "Promise of Guarantee" for a credit facility for the Seabras-1 Brazil-US cable project subject to certain closing conditions.

Seaborn Networks intends to use the buyer credit to facilitate the manufacture and installation of Seabras-1, a new four-fiber pair Brazil-US submarine cable system being built by Alcatel-Lucent for Seaborn Networks. Seabras-1 will be the first direct route between Sao Paulo and New York, and the system will also have a landing in Fortaleza, Brazil.

Seaborn Networks also announced that the maximum design capacity for Seabras-1 has been increased from 32 Tbps to 40 Tbps in response to market and customer demand for high bandwidth services.

"Our receipt of the Coface Guarantee is a critical achievement for the Seabras-1 project," said Larry Schwartz, CEO of Seaborn Networks. "As Brazil and other South American countries continue to experience unprecedented growth in demand for telecommunications services, Seabras-1 is well positioned to support the region's international communications needs."

This new submarine cable system will be based on Alcatel-Lucent's advanced 100 Gbps coherent technology, developed by Alcatel-Lucent in Villarceaux, near Paris. The ready-for-service date of Seabras-1 is in 2015.