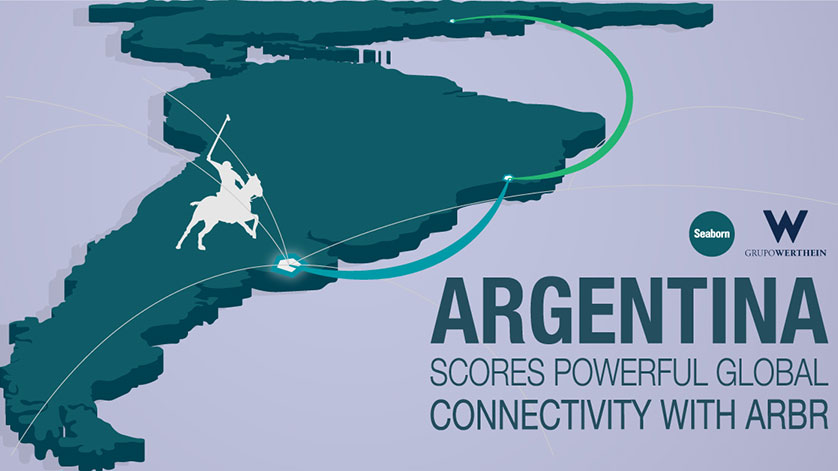 The ARBR system will provide onward connectivity via Seabras-1 for the most direct route between Argentina and the United States.

The ARBR system will be developed and owned by Seabras Group (an affiliate of Seabras) and Werthein. Seabras is the sole owner of the entire Seabras-1 submarine cable system between New York (US) and Sao Paulo (Brazil), which itself was developed and is operated and owned by Seaborn Networks together with funds managed and/or advised by Partners Group, the global private markets investment manager with US$57 billion in assets under management. Seabras has sold capacity on Seabras-1 to a wide variety of large and small telecommunications companies and other customers either via indefeasible rights of use (IRUs) or short-term leases. Just as Seaborn is the operator of Seabras-1, Seaborn will also be the operator of the ARBR system. The combined ARBR + Seabras-1 cables reflect a total project size of more than US$575 million.

"We are very pleased to announce our agreement with Grupo Werthein to build and operate the ARBR system," said Larry Schwartz, Chairman and CEO of both Seaborn Networks and Seabras Group. "This project responds to the Argentine market need for substantially more international capacity on a next generation system while also offering the country's first independent operator model for a critical submarine cable route."

Argentina's Communications Minister Oscar Aguad, said, "Argentina needs a global modernization of communications infrastructure and this first independent submarine cable system is a very important step for that purpose. We are on the path of economic transformation of the country. This great project is the result of the new rules of the game that we promote, which, by providing predictability and legal security, allow the necessary conditions for companies to invest on a large scale with new projects in the country."

"Given that it has been sixteen years since the last submarine cable was built from Argentina to Brazil, combined with the fact that this is the primary route for data and voice communications between Argentina and the rest of the world, this new and independent route is overdue," said Dario Werthein of Grupo Werthein.

The new ARBR system's Brazil landing will be in the existing Seabras-1 cable landing station in Praia Grande (Brazil), thereby enabling direct onward connectivity to New York on Seabras-1. The Argentina landing for ARBR is expected to be in or near Las Toninas. The ARBR system will be a four-fiber pair system with an initial maximum design capacity of 48 Tbps and an anticipated completion date in the second half of 2018.

Prepare for Subsea Prosperity with Radar