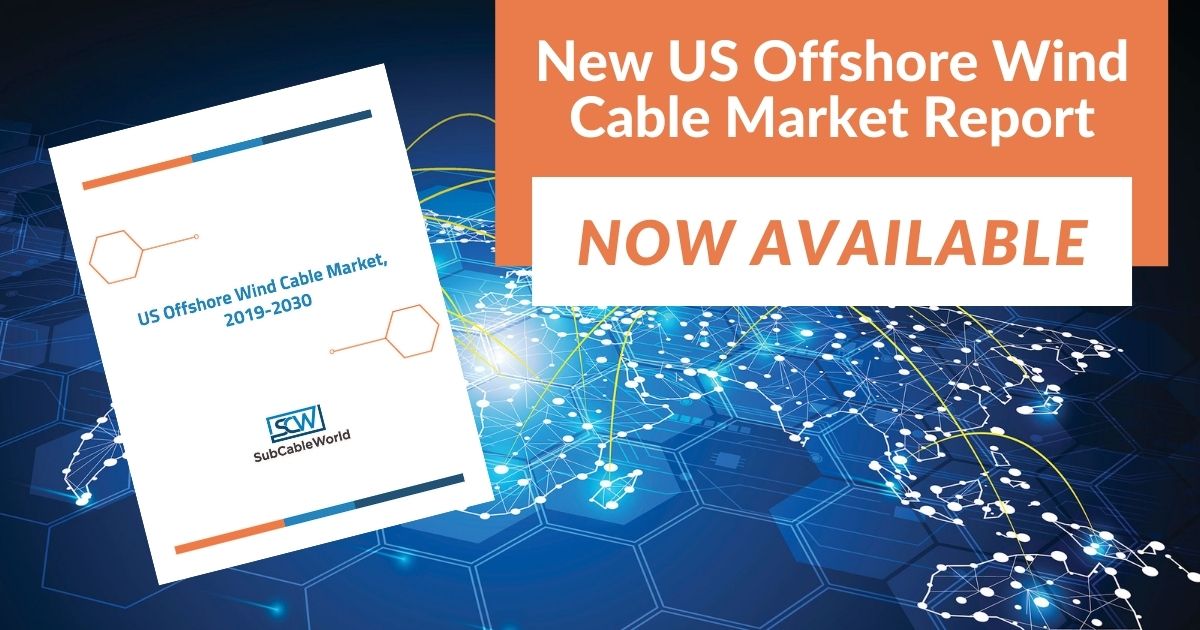 SubCableWorld (SCW), the definitive data and information source for the submarine cable industry, has published a new report and forecast for the US offshore wind cable market.

US Offshore Wind Cable Market, 2019-2030 outlines how the offshore wind market in the United States is witnessing a resurgence of momentum following the Biden Administration’s early focus on growing the renewables industry, and this is already having an immediate impact on the demand for offshore wind cable.

After more than a year of stagnation, the offshore wind cable market in the US is being driven by the new Administration’s first-week pledge to deploy 30 gigawatts of offshore wind energy by 2030. Cable demand, which SubCableWorld defines as the amount of cable represented in supply contract awards, immediately picked up and shows significant potential for future growth.

“Since President Biden signed an executive order to double offshore wind energy production by 2030, the federal government has been moving the market forward at a pace not seen previously,” said John Manock, editor of SubCableWorld and author of the report. “This is a very favorable situation for cable suppliers. The US is still building out its offshore wind supply chain, but progress is being made as investors eye the growing demand for cable.”

SubCableWorld’s report looks at the US offshore wind cable market from several perspectives. It tracks the supply contract awards that have been announced for commercial-scale projects from the inception of the market through the summer of 2021, thus highlighting the most quantifiable metric of cable demand. The report also reviews the steps taken by BOEM, the states and offshore wind farm developers during 2021. These actions do not always necessarily have a direct impact on the cable market, but they fuel the pace of progress for the overall industry, which ultimately will require a steady supply of offshore wind cable. As such, the context around these developments is critical to understanding the market and its potential.

Finally, the report presents three scenarios for future growth based on SubCableWorld’s proprietary model of the market. With a forecast period extending out to 2030, these scenarios present a forecast based on projects already in the pipeline, as well as a moderate and an aggressive growth scenario for later in the decade.

SubCableWorld’s model shows that a rapid development of floating offshore wind technology could drive the offshore wind cable market to a level that has the potential to make the United States a Top 3 global market by 2030, which would position it to continue as a leading global market in the following decade.

US Offshore Wind Cable Market, 2019-2030 costs 595 USD and is available for purchase here or by contacting Jessie Lewis at jlewis@tscstrategic.com.

SubCableWorld (SCW) is the definitive guide for understanding the intricacies of the global submarine cable market.  As the telecoms and offshore wind sectors drive unprecedented demand on the cable industry, SubCableWorld offers its members exclusive access to decision-critical data and essential information. SubCableWorld’s real-time market intelligence originates from an ever-evolving information service and forecasting tool that offers an unrivalled source of industry intelligence for the Fiber Optic Cable and the Wind Power offshore industries. Learn more about SubCableWorld, our industry data, consulting & bespoke reporting services, and subscriptions here.