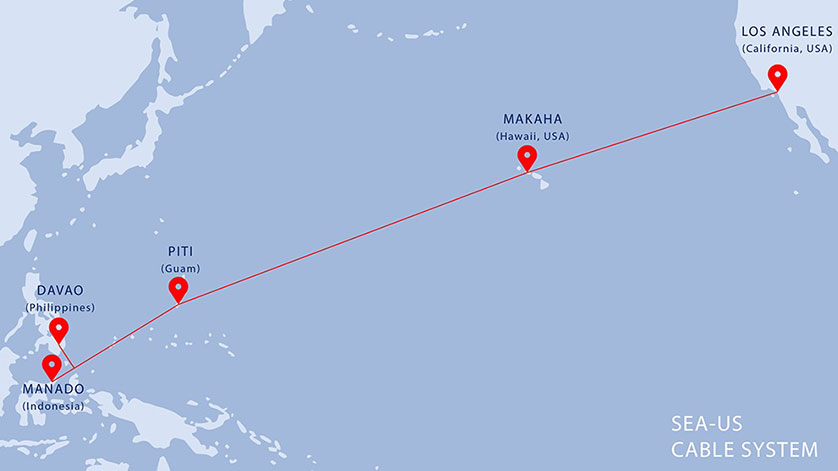 Hawaiian Telcom announced that the Federal Communication Commission (FCC) has approved the landing license for the state-of-the-art Southeast Asia – U.S. (SEA-US) fiber cable system. This key milestone enables the connection between the U.S. and Indonesia.

“Hawaiian Telcom invested $25 million to become an owner and operator of SEA-US, the most technologically advanced trans-Pacific cable system providing the fastest direct access between the U.S. and Indonesia,” said CEO Scott Barber. “With this investment, we have added needed broadband capacity, which will serve the state of Hawaiʻi for many years to come. SEA-US will connect Hawaiʻi to more than two billion people in the Philippines, Indonesia and Southeast Asia, as well as the mainland U.S., providing the infrastructure to launch new economic opportunities.”

“Our investment in SEA-US, combined with our $500 million investment to lay next-generation fiber infrastructure throughout the islands, helps to ensure that Hawaiʻi has a strong internet backbone to support economic growth,” said Barber.

The SEA-US undersea fiber cable was successfully connected at the shore-end in Hermosa Beach, California where construction of the cable landing station is expected to be completed later this month. The ship laying the submarine fiber is en route to Honolulu, scheduled to arrive in February.

The historic $250 million SEA-US cable system will extend more than 9,300 miles on a route designed to bypass congested, earthquake-prone regions (Luzon Strait) and optimize stable connectivity. It will deliver an initial 20 Terabit per second (Tb/s) capacity, using state-of-the-art 100 Gigabit per second (Gb/s) technology. This capacity will help to meet the exponentially growing demand for bandwidth between the U.S. and Asia, while enabling onward connectivity to existing and planned submarine cable systems.