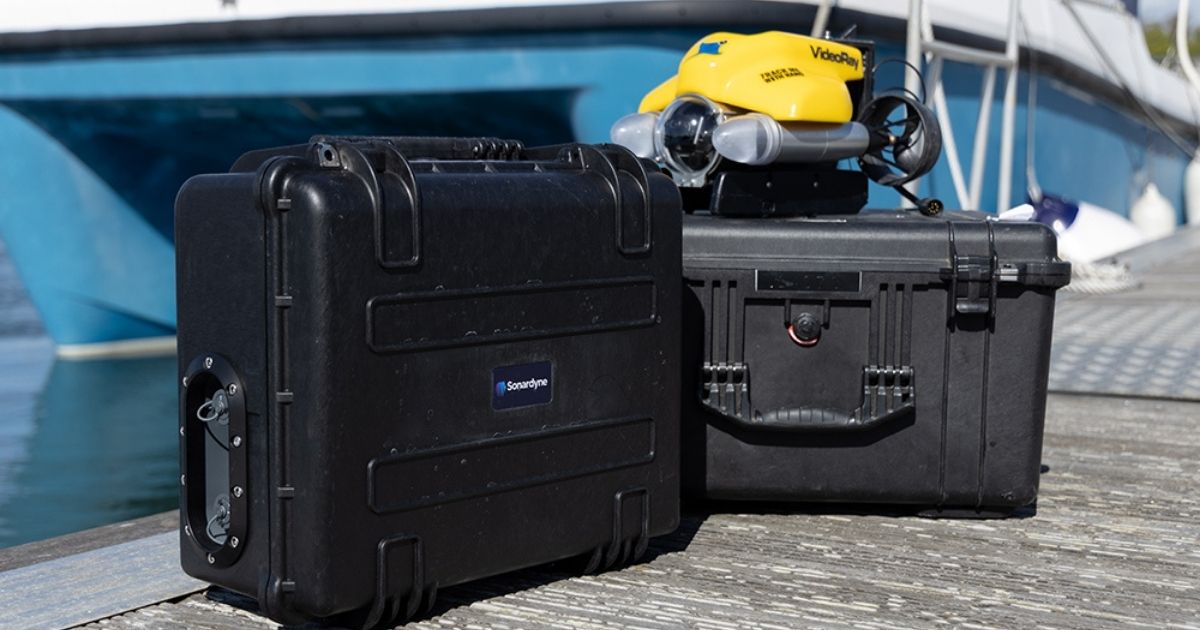 Everything needed to start tracking divers, remotely operated vehicles, autonomous underwater vehicles, or any other subsea targets is contained in a single, IP67-rated ruggedised case small enough to operate-anywhere, from anything.

The one-box USBL solution is able to track up to 10 targets out to 995 m. Inside the case is a Micro-Ranger Transceiver (MRT) with 10 m of cable, a GNSS antenna with 5 m of cable, and two Nano transponders and command hub. A built-in battery provides more than 10 hours of continuous use, enough for a full day of activity out on the water. The case can also accept external power from a boat or shore supply.

To get started, users simply have to connect their laptop running the Ranger 2 software to the case via Wi-Fi, put the MRT in the water, connect the antenna, and fit a Nano to each target. Sonardyne says even first-time operators can expect to be up and running in around 30 minutes.

Nano transponders are the perfect size and weight for divers, small towfish and micro ROVs. The two that come in the case are Sonardyne’s recently introduced second generation model, offering extended battery life and depth rating. A connector-equipped Nano is also available allowing it to operate continuously via an external power source. Customers can choose the type of Nano transponder that comes with their system at the time of ordering.

The needs of AUV developers who need to both track and communicate with targets have been addressed with the Micro-Ranger 2 integrator system kit. It comes complete with Sonardyne’s add-on Marine Robotics software pack and AvTrak 6 Nanos, which support two-way messaging, vehicle control and tracking in one small instrument.

John Houlder, USBL product line manager at Sonardyne said; “Whether you’re looking for flexibility, ease of use, or convenience, Micro-Ranger 2 is the ideal solution. It’s a smaller, lighter and more complete portable system than anything else on market. And it’s very competitively priced when you consider everything that’s included in one box as standard It’s export-licence free and is engineered to be safely carried on passenger aircraft. Then, when you get to where you’re working; a quayside to track an ROV, a RIB for tracking divers or a small boat to track and control your AUV, just turn it on, connect to the control hub with your laptop and away you go."

Micro-Ranger 2 is ideal for supporting shallow water operations in offshore wind, including seabed instrument positioning and release with its command functionality and/or positioning objects relative to each other. Because it’s built with the same Wideband-2 signal architecture and 6G hardware as Sonardyne’s Ranger 2 family, it’s also fully compatible with the company’s Release Transponder 6 range (RT 6). It also suits quick mobilization for underwater inspections using small ROVs. The integrator kit is ideal for AUV developers who want to trial their ideas and capabilities, including swarm capabilities, inshore before moving into deeper waters.

Sonardyne have also recently introduced an upgraded and extended Nano range which; improves the acoustic performance of the Nano transponder, extends its operational depth range and increases its acquiescent battery life to 90 days. Nano transponders are now available with or without connectors or as OEM options.