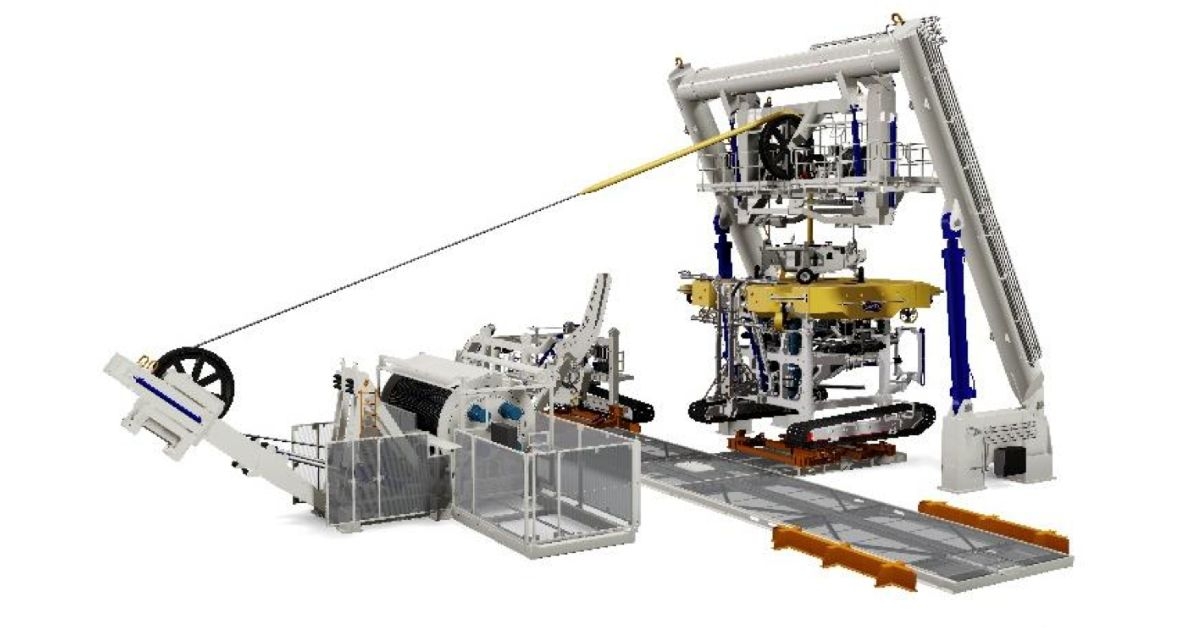 The solutions are an evolution of SMD’s specialized Wide Angle A-Frame, creating a bespoke system to accommodate a high vessel freeboard, allowing the Orange Marine trenchers to operate in higher sea states.

Matthew Woodward, business development manager for handling systems at SMD, who has worked closely on the project, said; “The most dangerous time for an ROV launch is as the vehicle is released from the A-Frame and enters the often-rough ocean splash zone, and when it is being raised back onboard.

“SMD’s Wide Angle A-Frame has a greater outreach and working arc than that of a conventional A-Frame system. This means that the air gap between the ROV and the water is minimized during launch, which reduces the pendulum effect caused by vessel motions on the vehicle. Limiting these forces is important to ensure a clash between the ROV and vessel structure is avoided and the vehicle’s umbilical cable is not overstressed. Ultimately this simple solution makes it much easier and safer for operators to launch and recover the vehicle without damage in high sea states.

“At SMD, we pride ourselves on the relationship we foster with our client base. For this project, we have worked very closely with the technical team at Orange Marine and discussed many options to arrive at this preferred solution.

“The LARS is also supplied with an axial fleeting umbilical winch, which fits within the tight space envelope on deck and we’re able to deliver the complete system within the desired timeframe. It’s been a great experience collaborating with the team at Orange Marine to find a solution that meets their needs, and one that gives them so many operational benefits.”

This project consolidates a long-standing relationship between the two organizations. The first system is due for delivery to Orange Marine’s Italian subsidiary (Elettra Tlc spa) in Sicily at the end of 2020, with the second system expected to start work near Singapore in mid-2021. SMD will also provide structural assessments on the vessel decks, installation, and commissioning support once the handling systems are onboard to ensure they are fully operational before the trenchers are first launched.