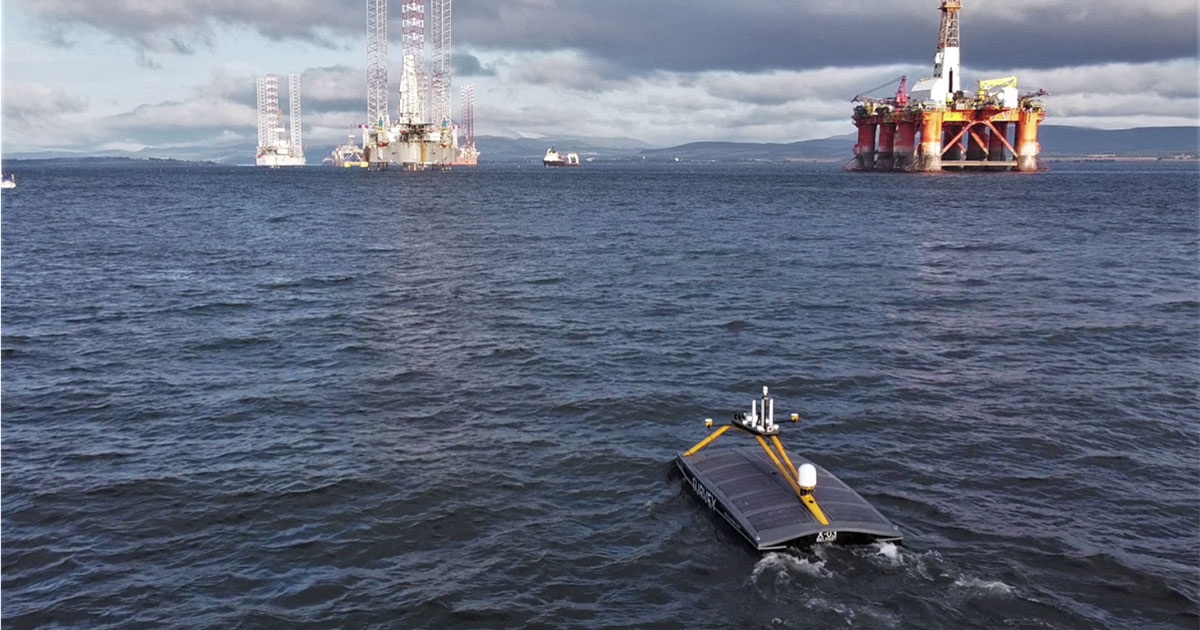 XOCEAN’s USVs are 4.5 meters in length and can deliver real-time to operators anywhere in the world. (Photo credit: XOCEAN)

A robotic boat has been used for the first time to survey fish populations around oil platforms in the North Sea.

The survey was part of a project led by the University of Aberdeen, looking at the effects of decommissioning oil and gas structures on marine ecosystems. The robotic boat, known as an Uncrewed Surface Vessel (USV), owned and operated by ocean data company XOCEAN, used sonar to collect data on fish numbers around several oil platforms off Scotland’s north-east coast.

XOCEAN’s USVs operate ‘over the horizon’ transiting unaccompanied hundreds of kilometers from shore, without the need for a mothership. Fitted with high end commercial fisheries sensors, the USVs perform the same task as a crewed vessel but without the need to send a single person offshore. Instead, XOCEAN’s innovative platform brings the surveyor online in real time to collect and validate the data from anywhere in the world.

XOCEAN’s XO-450 USVs are around the size of an average car (4.5 meters), allowing it to get within 10m of a platform – significantly closer than a conventional ship. The project, part of the UKRI-funded INSITE (Influence of Man-made Structures in the Ecosystem) program, aims to better understand the influences offshore structures have on commercial fish populations in the North Sea.

The survey was led by Dr Joshua Lawrence, from the University of Aberdeen. He said: “The survey was a great success. After months of planning and working closely with XOCEAN and the platform operators, it was great to finally see the Uncrewed Surface Vehicle collecting data. It’s amazing how this sort of technology reveals new opportunities to advance our understanding of these structures and their influences on the North Sea ecosystem. Previous work has suggested that fish aggregate up to several kilometers away from some of these structures, so we designed the survey to make approaches to the structures from 10 km away in each direction.’

The next stage of the project will see Dr Dougie Speirs and Prof Mike Heath from the University of Strathclyde use the survey data to model the expected effects of a range of decommissioning strategies on the surveyed fish populations.

Dr Speirs said: “The data coming out of this survey is providing us with an exceptional high-resolution picture of what is happening to fish distributions around marine installations. It was fascinating to see real-time online images from the USV, and the resulting data will be invaluable as we construct our fish population models.”

James Ives, CEO of XOCEAN, said: “Conducting survey campaigns using USVs not only enables the collection of the highest possible resolution data, but it allows that to happen in a way that is safe, carbon neutral and economical for our clients.”

Commenting on the survey exercise, Paul Shearer, Environment Team Lead, from Ithaca Energy said: “We are delighted to have supported this important project to understand why fish congregate around structures in the North Sea. It is important that quality data and science is available to enable more informed decisions to be taken in how the offshore energy industry interacts with the marine ecosystem. We look forward to supporting the project in future work.”

Professor Paul Fernandes from the University of Aberdeen, the lead researcher on the project, explained why these data are so important. “Fish have long been known to gather at offshore structures,” he said. “However, the extent of this aggregation, and whether it leads to an increase in productivity to benefit our fish stocks, remains unclear. Offshore oil and gas platforms act as ¬de facto marine protected areas, so we are aiming to quantify the extent to which the increased numbers of fish found there spill over into the surrounding waters.”

The project, and the INSITE program, will run until 2023, and the team will be running similar surveys of more oil platforms using the USV next summer.