Kraken Sonar Gets Funding from the Canadian Government 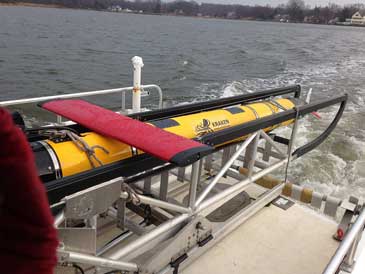 In addition to technical and business advisory services provided by NRC-IRAP, the funding is being used to develop the Kraken Active Towed Fish (KATFISH) for high speed, high resolution seabed mapping. The system will enable real-time seabed imagery, bathymetry and advanced 3D digital terrain models of the seabed. KATFISH will enable seabed mapping missions optimized for both manned and unmanned surface vessels.

Karl Kenny, Kraken's President and CEO, said, "We are very grateful for the continued support from NRC-IRAP. Their assistance enables us to continue to innovate our seabed survey solutions. We've stated on many occasions that cost effective and high resolution seabed mapping is mission-critical for many military and commercial applications. Placing a survey sensor -- such as Kraken's Miniature Synthetic Aperture Sonar -- closer to the seafloor will result in the acquisition of much higher resolution data. When the sensor is integrated onto a high speed, intelligently stabilized towed platform such as KATFISH, better quality data is acquired at a faster rate, thus improving efficiency and lowering both operational and data acquisition costs. In fact, we believe that KATFISH provides the highest resolution seabed pixels at the lowest cost compared to any other competing survey sonar platform."

In the commercial seabed survey market the offshore oil and gas production industry has increased the need for surveys of existing infrastructure (such as pipelines and subsea installations). Presently, this process is completed with slow moving (1-2 knots) Remotely Operated underwater Vehicles (ROV), or passively stable sonar systems at medium (3-4 knots) speeds. KATFISH operates at speeds up to 8 knots.

Offshore exploration and production companies require comprehensive, high-resolution surveys to ensure the integrity of these pipelines, as well as the engineering and development of underwater facilities. The results of these surveys must show detailed bottom topography, surface features such as boulders, outcrops, debris, pockmarks, drag marks, and gas vents, as well as sub-bottom features such as faults, shallow gas pockets and sediment structure.

Reducing the cost and complexity of marine survey operations can profoundly impact the economics of many marine industries. Driven by lower revenue and energy prices, today's oil and gas sectors are now seeking new technologies and tools that could lead to higher productivity, increased cost efficiencies and improved business models that rely less on expensive conventional manned systems. In fact, the offshore energy survey and mapping community may be on the verge of profound disruption, similar to that brought about by "aerial drones." Next generation low-logistics / high-performance "ocean drones" are offering new options for improved productivity at lower costs, and changing old business models in the process.

Katfish Targeting the Underwater Defense Market
In the defense market, there is a growing global requirement for modernization of mine countermeasures solutions. The previous generation of single-role minehunting vessels were designed and built between the 1970's - 1990's and many are now being withdrawn from service. A major drive is to replace these manned systems with multi-mission unmanned systems, such as Autonomous Underwater Vehicles (AUVs) and Unmanned Surface Vessels (USVs). While AUVs provide a valuable tool in the mine warfare toolkit, they are typically too slow (3-4 knots) to support in-stride, mine countermeasures. This leaves a growing requirement for high resolution, high speed seabed imaging platforms.

MINSAS not only delivers co-registered imagery and topography maps for very detailed site survey or infrastructure inspection (i.e. pipelines) but, using repeated surveys of the same area, enables detection of changes in seabed texture due to oil spills and even minute changes in the topography (e.g. reservoir subsidence). This repeat-pass survey technique is again analogous to the one used in InSAR to detect topographic changes such as landslides, etc. The ability of the KATFISH platform to generate centimeter-scale sonar resolution in all three dimensions can provide significant improvement in the detection, classification and identification of small seabed objects for both military and commercial seabed survey missions.

Active Towfish Technology Is Superior to Legacy Passive Towish Systems
From a platform perspective, towed sonar systems have the benefit of providing high speed sonar data to operators in real-time, which is a critical feature for search and survey operations requiring earliest possible identification and classification of seabed targets. Onboard real time processing of sonar data also allows for real-time online quality monitoring of sonar data.