Washington State University marine biologists for the first time have documented a wealth of fish in the “vastly underexplored” deep coral reefs off Hawaii Island.

The study gives fishery managers a more complete picture of fish species and habitat around the Big Island, home to a thriving aquarium fish trade, as well as other deep waters around the globe, said Cori Kane, a doctoral student at WSU Vancouver.

The research appears in the journal Coral Reefs. Kane’s co-author is Brian Tissot, a WSU Vancouver adjunct faculty member and director of both the Humboldt State University Marine Laboratory and the Humboldt Marine and Coastal Science Institute.

Kane and a host of student divers documented fish on reefs more than 100 feet below the surface, a depth known as mesophotic, as opposed to shallow. Less formally, it’s called the “Twilight Zone.”

For decades, users of scuba gear were confined to relatively shallow depths, as diving below 100 feet risked exposing them to nitrogen narcosis and decompression sickness. The adoption of trimix, a breathing gas of oxygen, nitrogen, and helium, in the late 1980s opened up deeper waters and the discovery of new species and ecosystems. 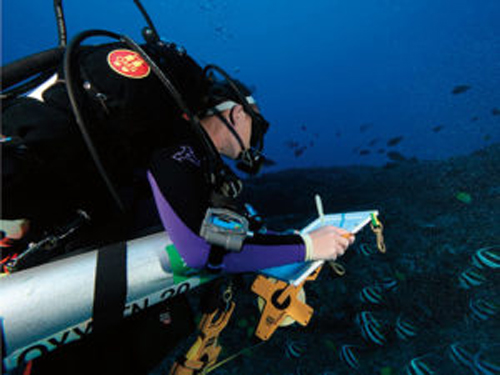 Earlier mesophotic work by Kane and colleagues found that nearly half the Northwestern Hawaiian Islands reef fish are endemic, species found nowhere else. That’s nearly twice as high as any other tropical region.

Kane’s new research is the first comprehensive study of mesophotic coral reefs on Hawaii island, and the first to document reefs below 65 feet around Hawaii’s big islands, Kane said. The island has some of the healthiest reef systems in the Hawaiian archipelago, she said, drawing recreational divers from around the world.

The island also accounts for most of Hawaii’s aquarium fish exports. The new information will add to reef managers’ knowledge of aquarium fish, filling gaps about the distributions and abundance of many heavily collected species.

Fishes in the upper regions of the mesophotic reef system, between 100 and 165 feet, are largely the same as those fishes found in shallow waters, Kane said.

“Reefs at these depths are vastly underexplored,” she said, “and this study shows that these deep reefs provide additional critical habitat for shallow reef fishes.”

One key difference of the deeper waters is that herbivorous fish critical to healthy coral reefs “are nearly absent in mesophotic reefs.”