WHOI Elects New Officers to its Board and Corporation 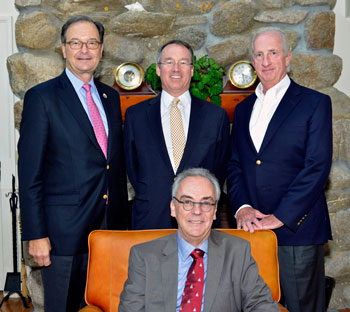 All three new officers are members of the WHOI Executive Committee, and all sit on one or more of the Institution’s committees.

The change in leadership coincides with the start Oct. 1 of Dr. Mark Abbott’s term as the Institution’s 10th president and director. Dr. Abbott’s appointment was announced in June.

“We’re tremendously pleased with this new slate of officers,” said Newton P.S. Merrill, who has served as board chairman since 2007. “All three newly elected officers have great passion for the ocean and have shown their deep affinity for Woods Hole Oceanographic Institution and its research through years of dedicated and active service. I’m confident they will provide Mark Abbott the support he needs to develop his strategic vision for the sustainable future of the Institution.”

David Scully, a partner of Coatue Management LLC, is devoted to the research conducted at WHOI and has served on the Executive, Investment, Development, and Research and Education committees, as well as the Access to the Sea Committee and two of the Ocean Institute committees (Ocean Life and Ocean Exploration). He also co-chaired the President Search Committee in 2014-15. Scully, who will serve a six-year term as chairman of the board, plans to retire from Coatue at the end of the year so he can dedicate the requisite time to supporting Mark Abbott in his new role.

"Ocean science is the key discipline to help address some of the biggest challenges we face today: fisheries, pollution, climate and national security,” said Scully. “WHOI is the best place to do ocean science, and Mark Abbott is the right person to lead WHOI and to guide the ocean science community at this critical time.”

Jeff Hughes has been elected vice chairman of the board of trustees, a new position for the Institution. As vice chairman, Hughes will assist in addressing a number of issues, including board governance, recruitment, finance and fundraising. Hughes, who was elected to the WHOI corporation in 2006 and to its board in 2012, chairs the Coastal Ocean Institute Committee and also serves on the Development Committee. In addition, he led the Ocean Institute Ad Hoc Review Committee in 2013 and was a member of the President Search Committee, 2014-15.

Hughes spent thirty years in various management positions at Merrill Lynch. He is currently a consultant and advisor to the Olayan Group in New York and is a partner in NewSmith Capital Management, a London based asset management firm. He is also associated with Capital Formation Group, a Boston-based financial planning firm. He is a past chairman of the Nature Conservancy on Long Island and a member of the New York Yacht Club and the Cruising Club of America.

Steven Hoch succeeds John O’Brien as the chairman of the WHOI corporation, which serves as the primary advocacy body for the Institution, and which has the governance role of choosing and electing trustees. Hoch has a long association with the Institution, and was elected to the corporation in 2002 and the board in 2007. Hoch is past chairman of the Nominating Committee, a past member of the Finance Committee, and current chairman of the Investment Committee. Hoch’s interest in stewarding ocean research extends beyond WHOI. He served two terms on the National Board of the Smithsonian Institution, and remains active as a director of the Smithsonian Tropical Research Institute in Panama. He is a director of Nestlé SA and chairman of the American Swiss Foundation. Hoch was a founding partner of Highmount Capital, LLC, which was recently merged with Brown Advisory, where he serves as a senior advisor.

“WHOI is an amazing place,” said Abbott, “and I am looking forward to working with the people of the Institution and the board and corporation as we continue to make WHOI the world leader in ocean science and engineering.”