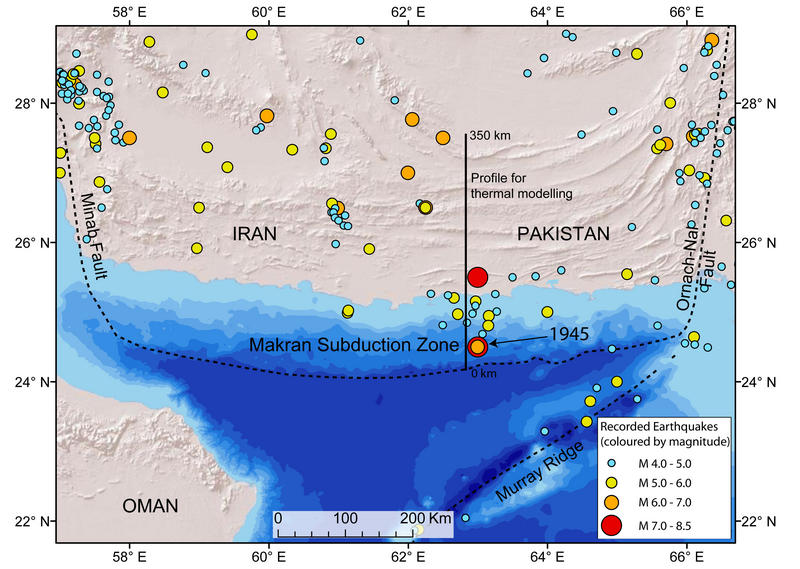 Earthquakes similar in magnitude to the 2004 Sumatra earthquake could occur in an area beneath the Arabian Sea at the Makran subduction zone, according to recent research published in Geophysical Research Letters.

The research was carried out by scientists from the University of Southampton based at the National Oceanography Centre Southampton (NOCS), and the Pacific Geoscience Centre, Natural Resources Canada.

The study suggests that the risk from undersea earthquakes and associated tsunami in this area of the Western Indian Ocean – whichcould threaten the coastlines of Pakistan, Iran, Oman, India and potentially further afield – has been previously underestimated. The results highlight the need for further investigation of pre-historic earthquakes and should be fed into hazard assessment and planning for the region.

Subduction zones are areas where two of the Earth’s tectonic plates collide and one is pushed beneath the other. When an earthquake occurs here, the seabed moves horizontally and vertically as the pressure is released, displacing large volumes of water that can result in a tsunami.

The Makran subduction zone has shown little earthquake activity since a magnitude 8.1 earthquake in 1945 and magnitude 7.3 in 1947. Because of its relatively low seismicity and limited recorded historic earthquakes it has often been considered incapable of generating major earthquakes.

Plate boundary faults at subduction zones are expected to be prone to rupture generating earthquakes at temperatures of between 150 and 450 °C. The scientists used this relationship to map out the area of the potential fault rupture zone beneath the Makran by calculating the temperatures where the plates meet. Larger fault rupture zones result in larger magnitude earthquakes.

“Thermal modeling suggests that the potential earthquake rupture zone extends a long way northward, to a width of up to 350 kilometers which is unusually wide relative to most other subduction zones," says Gemma Smith, lead author and PhD student at University of Southampton School of Ocean and Earth Science, which is based at NOCS.

The team also found that the thickness of the sediment on the subducting plate could be a contributing factor to the magnitude of an earthquake and tsunami there.

“If the sediments between the plates are too weak then they might not be strong enough to allow the strain between the two plates to build up,” says Smith. “But here we see much thicker sediments than usual, which means the deeper sediments will be more compressed and warmer. The heat and pressure make the sediments stronger. This results in the shallowest part of the subduction zone fault being potentially capable of slipping during an earthquake.

“These combined factors mean the Makran subduction zone is potentially capable of producing major earthquakes, up to magnitude 8.7-9.2. Past assumptions may have significantly underestimated the earthquake and tsunami hazard in this region.”

The image above shows the location of the Makran subduction zone of Pakistan and Iran and locations of recorded earthquakes including the 1945 magnitude 8.1 earthquake (red dot to the north indicates the 1947 magnitude 7.3 earthquake). The profile for the thermal modeling of this study is the north-south trending black line, with distance given along the profile from the shallowest part of the subduction zone in the south (0 kilometers) to the most northern potential earthquake rupture extent (350 kilometers).