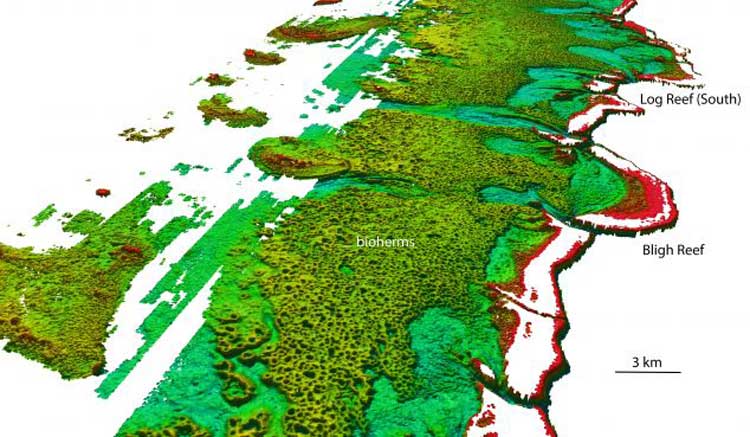 James Cook University, University of Sydney and Queensland University of Technology scientists working with laser data from the Royal Australian Navy have discovered a vast reef behind the familiar Great Barrier Reef.

JCU’s Dr. Robin Beaman says the high-resolution seafloor data provided by LiDAR-equipped aircraft have revealed great fields of unusual donut-shaped circular mounds, each 200-300 meters across and up to 10 meters deep at the centre.

“We’ve known about these geological structures in the northern Great Barrier Reef since the 1970s and 80s, but never before has the true nature of their shape, size and vast scale been revealed,” he said.

North-westerly view of the Bligh Reef area off Cape York. Depths are cultured red (shallow) to blue (deep), over a depth range of about 50 meters. Bathymetry data from Australian Hydrographic Service.

Dr. Beaman said it was an astounding revelation. “The deeper seafloor behind the familiar coral reefs amazed us.”

These form small limestone flakes on death, looking much like white cornflakes. Over time these flakes build up into large reef-like mounds, or bioherms.

Mardi McNeil from Queensland University of Technology and lead author on the new research paper, said their extent is vast.

Associate Professor Jody Webster from the University of Sydney, said the revelations about the extent of the bioherm field make questions over its vulnerability to climate change even more pressing.

“As a calcifying organism, Halimeda may be susceptible to ocean acidification and warming. Have the Halimeda bioherms been impacted, and if so to what extent?”

Dr. Beaman said the discovery also opened up many other new avenues of research. “For instance, what do the 10-20 meter thick sediments of the bioherms tell us about past climate and environmental change on the Great Barrier Reef over this 10,000 year time-scale? And, what is the finer-scale pattern of modern marine life found within and around the bioherms now that we understand their true shape?”

New constraints on the spatial distribution and morphology of the Halimeda bioherms of the Great Barrier Reef, Australia

High-res 3D images of the GBR bioherms can be seen here.

*Laser Airborne Depth Sounder (LADS) uses red and green LiDAR technology to rapidly scan the seafloor to depths of about 50 meters, generating a dense grid of depth data points. The bathymetry data are then used by the Australian Hydrographic Service (AHS) to revise the nautical charts used by mariners.

*Marine geologists previously understood the bioherms to form linear, dune-like parallel ridges and troughs, quite different to the complex seafloor now revealed with the benefit of LiDAR and multibeam swath bathymetry data collected in the past few years.

*Less than 15% of the Earth’s oceans deeper than about 200 metres have been mapped using modern surveying techniques.