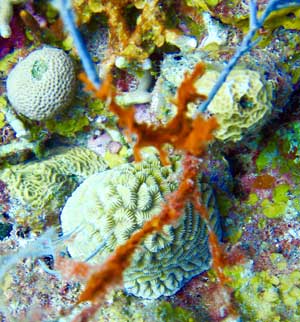 When Barack Obama became the first president to visit Cuba since Calvin Coolidge last week, his visit highlighted not only a new course in international relations, but showcased on-going scientific collaborations with the country only 90 miles off the Florida coast.

A map describing how currents that flow from Cuba to south Florida can carry fish larvae and affect coral health. Credit: NOAA

Late last year, NOAA, the U.S. National Park Service and Cuba’s National Center for Protected Areas agreed to share research to help the countries work together on some of the Caribbean’s most ecologically significant resources.

Banco de San Antonio’s coral reef is home to more than 100 species of fish, 15 species of coral, 40 species of sponges, sea turtles and other marine life. The health of the reefs in Cuba and the U.S. are intertwined. NOAA scientists will compare the Cuban coral reefs, known to be some of the most pristine in the region, with nearby reefs in United States waters. This will help us understand how climate change and other human activities are affecting these valuable ecosystems. Coral reefs provide habitat for fish, create protective buffers from storms for coastal communities and generate millions of dollars in tourism and economic vitality.

Collaborative fisheries oceanography research is also underway examining the biophysical connections of important pelagic fish species in the western Caribbean and Gulf of Mexico. In 2015, oceanographers from NOAA's Atlantic Oceanographic and Meteorological Laboratory partnered with fisheries biologists from NOAA’s Southeast Fisheries Science Center (SEFSC) to conduct a two-month oceanographic survey aboard the NOAA Ship Nancy Foster. The cruise sought to gain a better understanding of the distribution of and relationship between fish larvae spawned across the region. With Cuban participants onboard, the interdisciplinary team sampled the coastal waters of Cuba as part of a long-term study of Atlantic bluefin tuna, a highly threatened and commercially valuable species.

Regional ocean currents can transport fish larvae and other organisms, spawned off the coast of Cuba, into the Gulf of Mexico and ultimately the Atlantic Ocean, making collaboration on topics like fisheries management an area of mutual interest for both countries. Measurements and samples collected during the 2015 survey are providing species abundance and distribution data for the western Caribbean, and are helping to improve tuna stock assessments for the western Caribbean and the Gulf of Mexico. The data from Cuban waters are vital, as they will be used to further develop a regional larval habitat model for the bluefin tuna species.

AOML will once again partner with SEFSC for a fisheries oceanography survey aboard the NOAA Ship Nancy Foster in the spring-summer of 2016. Researchers will return to Cuban waters for additional fish larvae samples and data on Atlantic bluefin tuna larvae abundance and distribution in the western Caribbean. This information will be used to improve established stock management strategies for the species.

“We’re going to learn a great deal from Cuban marine scientists and be able to share with them what we know about the region,” said Jim Hendee, a coral ecologist at AOML. “Adding environmental information from these habitats is like finding the missing piece of a puzzle. It will help both countries improve our decisions about the management of the larger marine ecosystem.”