Underwater Robots to Investigate Microbial Communities in an Ocean Eddy 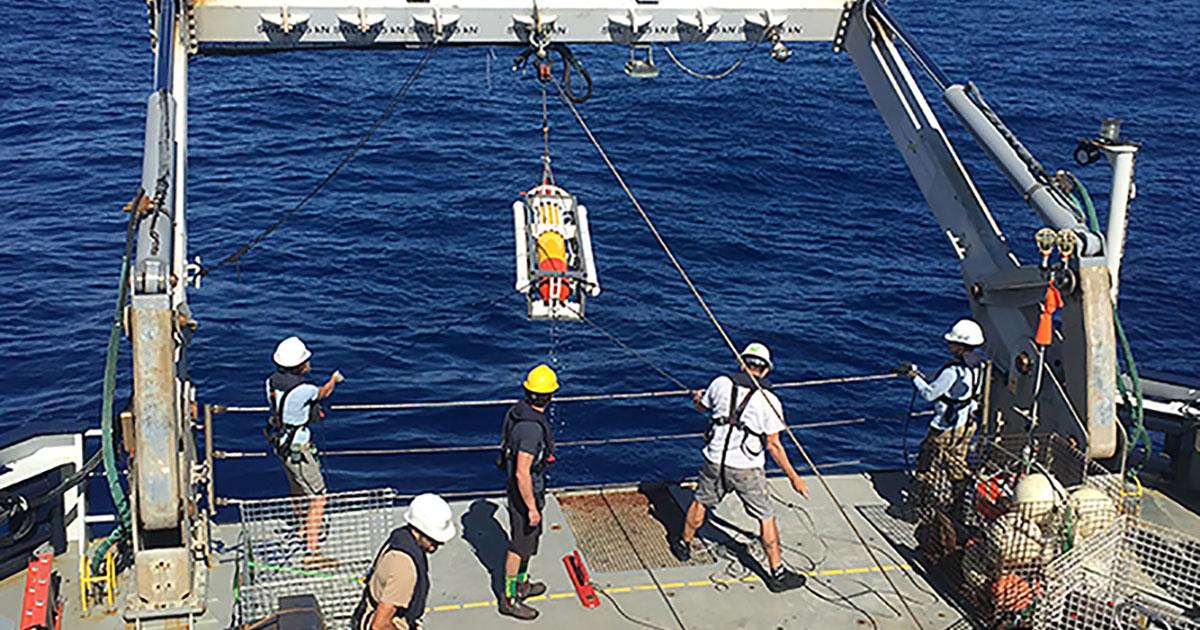 A paper recently published in the IEEE Journal of Oceanic Engineering reveals how oceanographers can utilize robots to learn more than ever before about oceanic eddies and their inhabitants.

In March and April 2018, scientists and engineers from MBARI and the University of Hawaii deployed a trio of autonomous vehicles to investigate microbial communities in an ocean eddy north of the Hawaiian Islands. The team combined forces to explore how such swirling eddies influence the function and activities of tiny but essential marine algae. 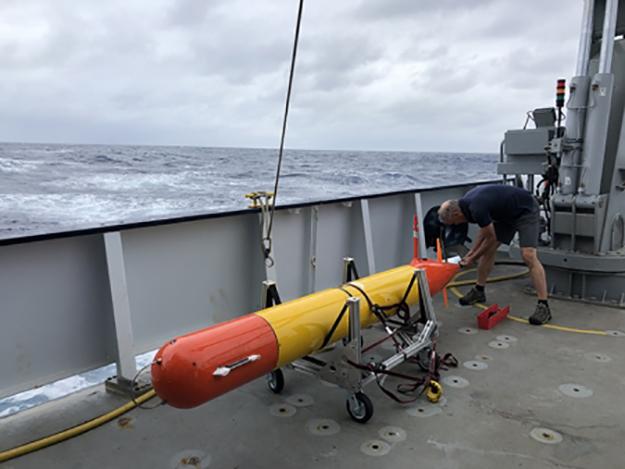 Oceanic phytoplankton form the base of the marine food web. In the clear waters around the Hawaiian Islands and elsewhere throughout the open sea, these tiny algae congregate in a dense layer about 100 meters (328 feet) below the sea surface, where they access both sunlight from above and nutrients from below to perform photosynthesis. This distinct layer of algae is called the deep chlorophyll maximum (DCM) because it contains high levels of chlorophyll, a pigment used in photosynthesis. Unfortunately for oceanographers, algae in this layer are invisible to satellites because they are so far below the surface.

A complex community of other organisms feeds on these algae, promoting the cycling of key elements such as carbon, nitrogen, and phosphorus, which in turn shape open-ocean ecosystems and influence global climate. Eddies play a pivotal role in this process. Those that rotate in a counterclockwise direction drive essential nutrients upward toward the surface, leading to increased phytoplankton growth and hotspots of biogeochemical activity.

“Microbes move with ocean eddies and currents. To understand how these communities function, we need to observe a cohort of organisms repeatedly as they move and undergo ‘booms and busts’,” said Yanwu Zhang, a senior research engineer at MBARI and lead author of the new paper. “Traditional methods of using ships to observe biological communities associated with eddies are very challenging and limiting.

That’s where underwater robots can come into play.”

The research was carried out northeast of Molokai, using the Schmidt Ocean Institute’s research vessel Falkor. During the experiment, researchers deployed two long-range autonomous underwater vehicles (LRAUVs) and one autonomous surface vehicle, called a Wave Glider, near the center of a counterclockwise eddy. Both LRAUVs carried sensors to measure water temperature, salinity, chlorophyll, and other properties of seawater.

One LRAUV was also equipped with a miniature robotic laboratory—MBARI’s third-generation Environmental Sample Processor (3G-ESP). “The combination of a 3G-ESP and an LRAUV creates a mobile sample collection and analysis system,” Zhang said. “By implanting intelligence in the vehicle’s control software, we are enabling autonomous targeted observations of discrete oceanographic features like the DCM without requiring a human presence.”

In the Hawaiian eddy study, this capability was used to find, track, and collect samples within the DCM. The 3G-ESP LRAUV dove down, locked onto that layer and moved with it for four days, even as the layer undulated up and down over tens of meters. In the DCM layer, the 3G-ESP acquired water samples every three hours.

While the 3G-ESP LRAUV was concentrating on its sampling mission, a second LRAUV swam around it to characterize the surrounding water properties. The second LRAUV used acoustic ranging to remain near the sampling LRAUV and provide a contextual picture of the environment around it. As the two LRAUVs performed their underwater dance, the Wave Glider at the sea surface acoustically tracked the 3G-ESP LRAUV to alert the team of its whereabouts below the sea surface.

Scientists of the University of Hawaii (led by Edward DeLong and David Karl) provided the theoretical basis for designing the DCM tracking algorithm, and are now in the process of analyzing the samples collected by the ESP-equipped LRAUV.

The results of this experiment are expected to shed light on how open-ocean eddies and changing ocean conditions affect biological processes that cannot be observed from satellites alone. As the ESP-LRAUV system matures, it will become possible to carry out open-ocean studies without heavy reliance on ships, giving scientists increased access to the ocean.

During this study, the robots used acoustic signals to track one another, but did not exchange information about what conditions were sensed around them, such as depth, temperature, salinity, and chlorophyll. MBARI Engineer Brian Kieft and his team are in the process of enabling such vehicle-to-vehicle data exchange so that multiple vehicles can carry out increasingly complex, collaborative sampling and observation missions.

Zhang noted, “When a fleet of robots are able to exchange key information about not only where they are but also what they are ‘seeing,’ and when they are able to autonomously interpret and respond to this information, the science and engineering collaborations will become all the more interesting.”