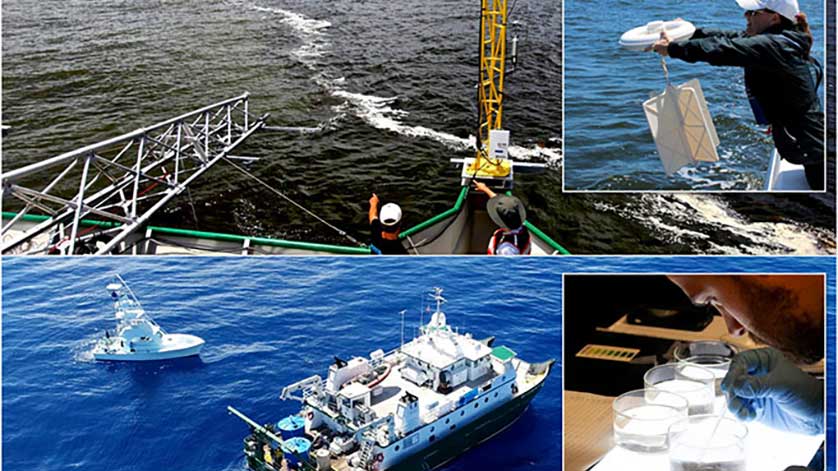 Researchers at the UM Rosenstiel School of Marine and Atmospheric Science were awarded $12 million in two research consortium grants from the Gulf of Mexico Research Initiative (GoMRI) to support research on the effects of the Deepwater Horizon oil spill in the environment.

UM Rosenstiel School was the only research institution to receive two of the eight highly competitive research consortia grants awarded by GoMRI in its final two-year funding cycle. Three awards totaling $2.5 million were also given to individual researchers at the school.

“We are thrilled that GoMRI recognizes the importance of the groundbreaking research led by Rosenstiel School researchers through their continued investment in the science of oil spills,” said UM Rosenstiel School Dean Roni Avissar. “The scientific teams can continue their critical research to further our understanding of the impacts of oil spills from all perspectives.”

The research grants were awarded two UM Rosenstiel School-based research consortia CARTHE (Consortium for Advanced Research on Transport of Hydrocarbon in the Environment) and RECOVER (Relationships of Effects of Cardiac Outcomes in fish for Validation of Ecological Risk).

Under the leadership of UM Rosenstiel School Professor Tamay Özgökmen, CARTHE, which consists of 19 principal investigators from 12 institutions, received $6 million to continue the necessary research to predict the fate of oil released into the environment to help inform and guide response teams in the event of future oil spills.

Since 2011, CARTHE has led four major observational experiments. The most recent, SPLASH (Submesoscale Processes and Lagrangrian Analysis on the SHelf), examined how ocean currents transport oil and other particles across the continental shelf and on shore. The study bridged the gap between the offshore observations from GLAD (Grand LAgrangian Deployment) and LASER (LAgrangian Submesoscale ExpeRiment) and the coastal observations from SCOPE (Surfzone Coastal Oil Pathways Experiment). In addition, complementary laboratory studies have led to new insights into oil plume dynamics and the effects of oil at the ocean surface. CARTHE research has been summarized in some 148 publications in 49 different peer-reviewed journals, and resulted in three patent applications to date.

During this third phase of CARTHE, which supports research through 2019, the research team will focus on analyzing the vast amount of unprecedented data that has been collected in the Gulf of Mexico and publishing new findings in high-impact peer-reviewed scientific journals.

“I like to think of GoMRI, a 10-year, 1000 scientist, $500 million project, as the ‘moon mission’ for the ocean,” said Özgökmen, director of CARTHE. “We are honored to continue to do our part to support this successful mission. Much of our success relied on our focused effort to conduct two large coordinated experiments per funding cycle to be able to deliver more than what we have promised, thanks to the vision and generous support from GoMRI. We deeply understand that this is a once in a lifetime opportunity for oceanographic science to make rapid progress through massively collaborative work and want to capitalize on it on all fronts.”

The research consortium, RECOVER, led by UM Rosenstiel School Professor Martin Grosell received a $6 million research award to conduct further studies on the impacts and toxic effects of crude oil on ecologically and commercially valuable fish that reside in the Gulf of Mexico. The RECOVER team, which consists of 10 principal investigators from five institutions, will continue their studies at the molecular, cellular, organ and whole animal level for two important Gulf of Mexico fishes, the coastal redfish and the pelagic mahi-mahi. Based on findings from RECOVER’s past and ongoing work, this new research award will include a heavy emphasis on how oil exposure affects animals in their natural habitats.

Previous landmark studies by RECOVER consortium members showed that fish embryos and larvae exposed to crude oil during early development results in malformation of hearts, impaired eye development and reduced ability to smell important environmental cues, which likely results in mortality or reduced performance in later life stages. RECOVER recently tagged wild mahi-mahi with pop-up satellite tags and found that they perform extensive migrations of up to 100 kilometers per day. Researchers plan to compare the migrations and survival of oil exposed and non-exposed wild mahi-mahi in the Gulf of Mexico.

“There is still much to learn about the impacts of crude oil on fish, and being able to address the remaining uncertainties from many angles in a larger and coordinated manner will further advance our understanding of the impacts of past and future oil spills,” said Grosell. “This level of funding provides a rare opportunity to examine scientific problems in a truly comprehensive manner and we are grateful that GoMRI has chosen to invest in our important research in this area.”

The awards are part of a $50 million research investment by GoMRI to support research on the impacts of oil, dispersed oil, and dispersant on the Gulf of Mexico ecosystem and public health to be carried out from 2018 through 2019. Eight consortia and 23 individual grants were awarded for this current round of funding.

“It is definitely high-pressure work, but I believe that when we look back in a few years, it will be also deeply satisfying to know we helped advance scientific knowledge of oil spills,” said Özgökmen, who as director of CARTHE received three highly competitive research grants and was part of GoMRI throughout its life cycle.

GoMRI is a ten-year research initiative established in 2010 and funded by a $500 million commitment by BP. GoMRI is administered by an independent Research Board, which consists of 20 experts in science, research administration, and public health. The research Board evaluates research proposals following merit review guidelines of the National Academies of Science and procedures similar to those of the U.S. National Science Foundation. All funding decisions are made by the Research Board, which is independent of BP and not connected to the Natural Resources Damage Assessment process.