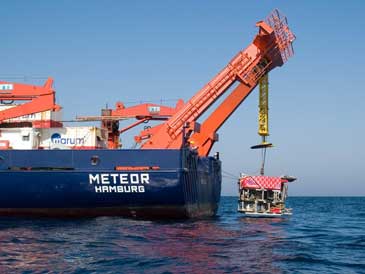 For thirty years the research vessel METEOR has been travelling in the Atlantic, the East Pacific and West Indian Ocean, in the Mediterranean, North and Baltic Sea. Approximately 60 times it has circled the Earth. Apart from researchers there are also diving robots onboard. Research team and crew now celebrated off the Azores not only the 30th anniversary of the vessel, but also the 400th dive of the diving robot MARUM - QUEST.

Use of the diving robot MARUM-QUEST from the research vessel METEOR during an expedition in the Arabian Sea. Photo: MARUM - Center for Marine Environmental Sciences; University of Bremen; V. Diekamp

Concurrent with the thirtieth birthday of the research vessel METEOR, the German Research Foundation (Deutsche Forschungsgemeinschaft – DFG) is highlighting the importance of research ships. During an anniversary cruise on 17 July 2016 off the Azores Islands in the Atlantic the president of the DFG, Professor Dr. Peter Strohschneider, said, “The particularly strong performance of German marine research at the international level could not be achieved without the use of research vessels. With substantial funding of research vessels as auxiliary equipment, the DFG assures knowledge-based research and promotes, above all, access by universities to these indispensable infrastructures.”

The METEOR is the second largest research ship in the German research fleet. It enables investigations of the water, organisms in the sea, the sea floor, and the atmosphere, and thus serves fundamental research in all the relevant disciplines of marine research. Routine daily costs for operating the METEOR, as well as for the MARIA S. MERIAN, the second research ship funded by the DFG, are covered at 70 per cent by the DFG and 30 per cent by the Federal Ministry for Education and Research (Bundesministerium für Bildung und Forschung – BMBF), which also owns the METEOR. The DFG Commission for Oceanography coordinates scientific cruise planning, while leadership of the ship’s operations is carried out by the Control Station German Research Vessels of the Institute of Oceanography at the University of Hamburg.

“The ships are the central platforms for marine research. Important knowledge of the role of the ocean in climate change, or fascinating discoveries such as the amazing biological communities on the mid-ocean ridge that thrive without oxygen, can only be realized with the help of research ships,” says Professor Dr. Michael Schulz, chair of the DFG Commission for Oceanography. “Ship time for research is thus a very valuable resource. The function of the Commission is to allot this time based on criteria of scientific quality.”

The METEOR has been continuously adapted to the needs of current science, and from a scientific viewpoint is still in very good condition today. It will continue to be used through the end of this decade, after which the METEOR as well as the research ship POSEIDON will be replaced by a new one. “It is very encouraging that the federal government has charted this course by making funds available for a new vessel,” said DFG president Peter Strohschneider. “The DFG will support the operation of the new ship with available funds, thus providing German marine research with the best possible infrastructure in the future.”