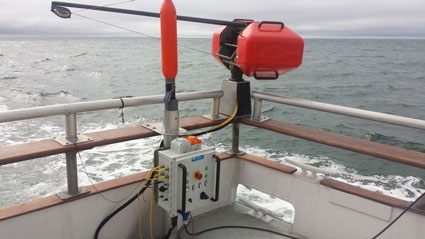 Teledyne Oceanscience supplied world-leading geospatial company TerraSond Limited with rapidCAST, a new innovative automated underway profiling system. According to TerraSond, the product was used in a major hydrographic project completed for NOAA’s Office of Coast Survey in the Bering Sea in northwestern Alaska for the purpose of nautical chart updating.

“The rapidCAST system contributed to the high production rate we experienced on this project, helping us to finish well ahead of schedule,” said Andrew Orthmann, TerraSond Limited’s charting program manager. “The project area was located in an exposed area of the Arctic with a limited ice-free season. It was therefore crucial that we finish the project before the fall storms intensified and the Arctic ice-pack moved back in, and the rapidCAST helped us do that.”

The rapidCAST system performed reliably, with no major issues encountered, and the following advantages were noted:

- Automation made the system less labor intensive, and it reached the targeted depth within 5% on most casts

- No mechanical issues were encountered with the rapidCAST itself, the system was very reliable with little maintenance necessary

TerraSond used the rapidCAST system with a Valeport rapidSV sensor to collect sound speed profiles for correcting the bathymetric data. The system was mobilized by TerraSond aboard the R/V Qualifier 105 (Q105), a 105’ research vessel which collected multibeam data 24/7.

Approximately 320 sound speed casts were conducted with the system over the course of the project, in depths from 5 to 40 meters. The interval between casts varied from 30 minutes to 3 hours.

For a video of rapidCAST in action and to learn more about this innovative new profiling system, visit here.