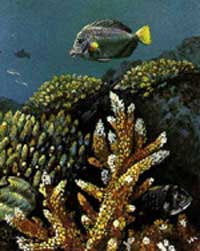 China has lost 80 percent of its coral reefs in the South China Sea since the 1970s and the region's native corals, mangroves and seaweed bed ecosystems have not been in optimal health for years.

Experts said the poaching of corals could jeopardize the existence of some reefs and islets in the South China Sea.

Addressing a Sunday celebration for the International Day for Biological Diversity, Wang Xiaoqiang, a deputy director at the State Oceanic Administration, said that the biodiversity and biome of the South China Sea have suffered from destruction and degeneration.

"Since the 1970s, 80 percent of coral reefs in the area have been lost and the lost mangrove area could add up to some 73 percent. The general situation is severe," Wang said at the event held by the Beijing-based China Biodiversity Conservation and Green Development Foundation (CBCGDF).

The CBCGDF found severe damage to coral reefs near the Yongle Islands, part of the Xisha Islands, during an expedition to the South China Sea in January. Coral reef coverage in the coastal waters of Yagong Island, Yin Yu and Quanfu Island is measured at less than 10 percent, according to a press release sent to the Global Times on Monday.

Apart from a rampant market in illegal coral sales that has destroyed coral reef ecosystems, analysts said that excessive fishing of giant clams has also led to reef destruction.

The Chinese Coast Guard warned in 2015 that the price of red corals in China has increased by 30 percent annually over the past 10 years, with the booming illegal industry stretching from poaching, procurement and processing to the sale of red corals.

"In 2013 and 2014, giant clams began to be sold as art work after carving, which then led to excessive exploitation. While only one kind of giant clams is listed as a protected species in China, it is hard for fishermen to tell the difference, hence great damages were done on all kinds of giant clams in the area," Chen Hui, secretary-general of Hainan Provincial Maritime Environment Protection Association, told the Global Times.

Mistaken government support for and promotion of the giant clam industry in Tanmen, Hainan Province sped up the process and many local fishermen flooded to the Xisha, Nansha and Zhongsha Islands. Some fishermen even went as far as the South Pacific Ocean, according to Lin Hongmin, a retired senior engineer with the Hainan Construction Project Planning and Design Institute.

"Giant clams are caught either through direct fishing by divers or some try to remove empty shells stuck on coral reefs. Crowbars and even explosives could be used in the process. However, giant clams are a characteristic species in coral reefs, and corals are core in tropical ocean ecosystems," Lin said.

The damage to coral reefs in the South China Sea will eventually jeopardize local fishermen as the fishing resources will decrease after fish and shellfish lose their habitats on coral reefs, Chen said.

The South China Sea has different kinds of ecosystems, including coral reefs, mangroves and seaweed beds. There are over 200 kinds of biological resources in the Nansha Islands, whose coral reef ecosystem is highly characteristic in the world and is prioritized in conservation, Wang said.

"As owners of the Nansha Islands, China cares about protecting the ecological environment of relevant islands, reefs and waters more than any other country, organization or people in the world," Chinese Foreign Ministry spokesperson Hong Lei said at a press conference earlier in May.

Several organizations, including the Chinese Academy of Sciences and the CBCGDF have launched projects to restore the coral reefs in the South China Sea through artificial cultivation, media reports showed.

"It is a difficult and time-consuming project as corals need to be transplanted by hand on either remaining coral reefs or bare rocks under water. Almost all reefs in the South China Sea are formed over centuries by corals. The loss of new corals will not only put the existing reefs under direct threat from sea waves and typhoons, but in the long-term will threaten the existence of the reefs themselves," Lin warned. The foreign ministry has guaranteed limited impact on the ecological system of coral reefs as the nation reclaims islands in the region through "natural simulation," which simulates the natural process of sea storms blowing away and moving biological scraps which gradually evolve into oases on the sea.

"Once China's construction activities are completed, ecological environmental protection on relevant islands and reefs will be notably enhanced and such action will stand the test of time," spokesperson Hong said. (Global Times)