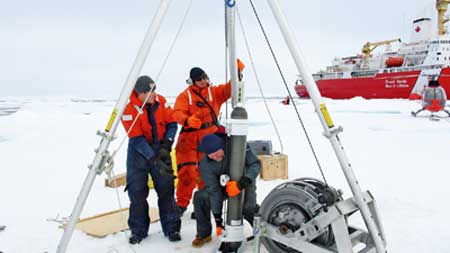 For at least half a century and probably longer, the climate in the Arctic has run like a clock. As reliably as a pendulum, it has oscillated every five to seven years between two distinct self-regulating phases that shift the region’s winds, ice, currents, and other conditions.

But in a new study, scientists say the system has been stuck in one phase since 1997. The monkey wrench that’s jamming the works, they suspect, may be warming temperatures that are accelerating the melting of the Greenland Ice Sheet.

Arctic climate is regulated by an intricate series of interconnected mechanisms, said Andrey Proshutinsky, a physical oceanographer at Woods Hole Oceanographic Institution (WHOI) and lead author of the new study. At the center of the whole Arctic climate system is the Beaufort Gyre—a swirling wind-driven circulation cell north of the Beaufort Sea that encircles an area larger than the Gulf of Mexico.

It works like this: During some multiyear periods, the Arctic is cold and dry and dominated by high atmospheric pressure that sets in motion strong anticyclonic (clockwise) winds over the Beaufort Gyre region. The winds drive the powerful clockwise-circulating Beaufort Gyre. The cold thickens sea ice. The gyre encircles a huge reservoir of sea ice and fresh water that drains into the region from many big northern rivers and the Bering Strait. The gyre corrals this pool of ice and fresh water, preventing it from flowing southward into the North Atlantic Ocean.

During other periods, however, this complex ocean-ice-atmosphere system shifts gears. Cyclonic storm systems that form in the North Atlantic move up into the Arctic, bringing heat and moisture. The Arctic atmosphere becomes relatively warm and humid. Atmospheric pressure decreases, causing winds to reverse. The gyre weakens and its circulation turns counterclockwise. The huge pool of trapped sea ice and fresh water then leaks out and flows out of the Arctic Ocean and into the North Atlantic. This creates a layer of cold but less dense water that caps the surface of some parts of the North Atlantic. The layer blocks heat from the ocean from escaping into the atmosphere and tempering wintertime climate in the North Atlantic region.

The gears continue to turn. Colder sea surface temperatures in the North Atlantic provide less heat to fuel cyclones. Fewer cyclones form to penetrate the Artic, and so the region eventually shifts back to being cold and dry and dominated by high pressure that cranks up the Beaufort Gyre again.

Between 1948 and 1996, these two phases reliably seesawed back and forth every five to seven years. But in their new study, the scientists observed that since 1997, the Beaufort Gyre has been stuck in an anticyclonic, or clockwise, phase. Clogging the works, the scientists hypothesize, are warming temperatures caused by global climate change. The warming is increasing melting of the Greenland Ice Sheet, sending more cold fresh water into the North Atlantic. This cold water (not cold water from the Beaufort Gyre) inhibits cyclone formation that would eventually shift the gyre back into the counterclockwise mode.

“We expect that Greenland will continue melting, creating conditions in the Arctic that will remain cooler for longer,” Proshutinsky said. “This would have broad-reaching climate implications”—affecting temperatures, ice formation, winds, ocean circulation, and climate throughout the Arctic and North Atlantic regions and beyond.

Proshutinsky first saw signs of a change in 2003, when he launched what has become a multiyear, multi-institutional effort to monitor the Beaufort Gyre. Based on the previous longstanding cycle, the WHOI-led team expected to find the gyre in its counterclockwise mode in 2003. Instead, they found anticyclonic conditions and a huge pool of freshwater piled up in the Beaufort Sea and blocked by the gyre.

“That’s when we knew, wow, something happened,” said Richard Krishfield, a WHOI researcher and co-author of the new study. Every year since, scientists have journeyed to the remote region in icebreakers to redeploy subsurface moorings and Ice-Tethered Profilers, which carry instruments that continually measure ocean and ice conditions.

“We kept on waiting for the thing to turn,” Krishfield said. “We’re still waiting.”

The past may not foretell the future

Proshutinsky said that 2015 marked the highest volume of freshwater in the Beaufort Gyre since 2003. Armed with these observations and monthly calculations of freshwater flow from Greenland, the scientists discerned a connection between the mysterious presence of freshwater in the Beaufort Sea and the gyre’s surprisingly long-lasting anticyclonic circulation trend. “Every time in history after each one of these circulation trends, there would be a freshwater pulse from the Arctic Ocean into the Greenland Sea in the North Atlantic.” Krishfield said. “Now it could be that freshwater from Greenland is preventing that from happening.”

Proshutinsky and Dmitri Dukhovskoy of Florida State University used climate modeling to reveal a trend that they say may become the new normal: anticyclonic circulation that lasts 15 years or more, followed by a cyclonic phase of just a few years. To test other future scenarios, the scientists doubled the amount of fresh water from Greenland in their models and found that if global temperatures continue to rise, anticyclonic periods may last 30 years or more, followed by three-to four-year cyclonic periods.

Given these signs of big changes with far-reaching climate ramifications, we need continuing observations to know which way the wind will blow in the Arctic.