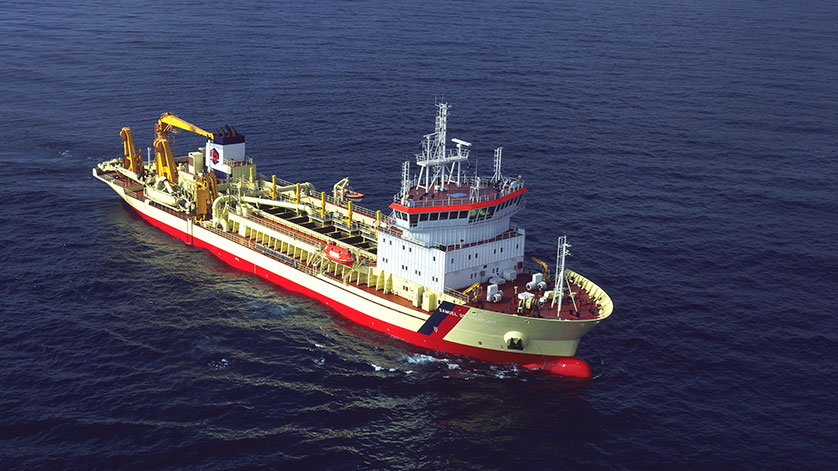 The conversion into dual fuel of Trailing Suction Hopper Dredger (TSHD) Samuel de Champlain is now in its active preparation phase. It is the main part of the EU-funded S/F SamueLNG Project, led by French DRAGAGES-PORTS EIG, which has the overall aim to improve the sustainability of marine traffic through the use of marine liquefied natural gas as an alternative to conventional ship fuels for vessels.

Following a public tender for the conversion work, in 2017, the contract was awarded, on 6th July, to DAMEN SHIPREPAIR & CONVERSION HOLDING BV by DRAGAGES-PORTS EIG. The TSHD Samuel de Champlain, which currently only uses diesel oil, will be converted to dual-fuel (liquefied natural gas/diesel oil). This tender, worth € 20.8 million, includes a major phase for the replacement of gensets, and the inboard installation of LNG tanks and networks, and an optional phase for the maintenance of the genset and associated equipment for a period of 8 years.

Jean-Pierre Guellec, CEO of DRAGAGES-PORTS, said "This LNG conversion of a dredger vessel is the first of its kind in the world. It will generate significant environmental gains through reduction of nitrogen oxides, carbon dioxide and particles emissions, beyond current standards."

Studies and equipment orders started during summer 2017. The conversion operation itself will last three and a half months, from September 2018 onwards, in DAMEN’s Dunkirk shipyard. Alexandre Richerd, DAMEN’s Sales Manager, commented "This contract proves DAMEN Group's ability to offer its customers turnkey solutions for complex conversions integrating engineering and procurement, as well as its desire to develop its activities in the LNG sector".

The Samuel de Champlain dredger will be equipped with three new dual-fuel MAN 6L35/44DF gensets and two C-type tanks with a working capacity of 153 m3 each which will allow a full week’s operation.

The exemplary nature of this operation, which is part of a larger European project called 'S/F SamueLNG', means it has the financial support of the European Union, via the Connecting Europe Facility (CEF), without which this operation wouldn’t have been possible.

Furthermore, this conversion is a step towards the energy transition for the owner (DRAGAGES-PORTS EIG) and the operator (Nantes-Saint Nazaire Port) of the Samuel de Champlain.