Researchers Define a Distinct Mantle Domain in the Southern Ocean 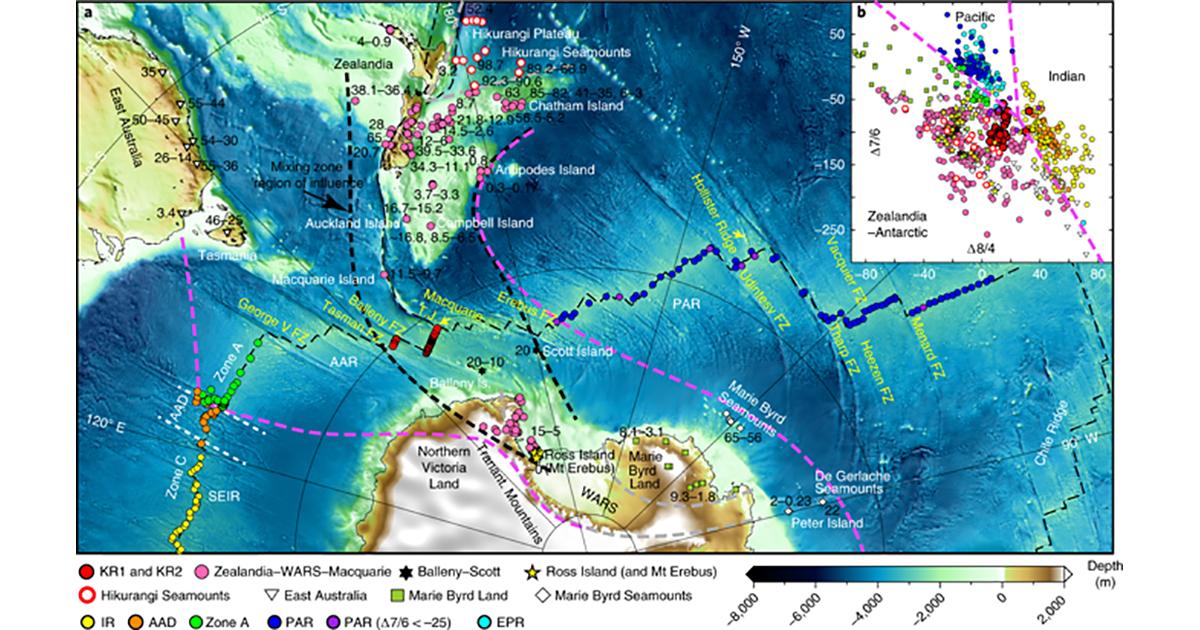 New data collected by University of Wyoming researchers and others point to a newly defined mantle domain in a remote part of the Southern Ocean.

UW Department of Geology and Geophysics Professor Ken Sims and recent Ph.D. graduate Sean Scott are co-authors of an article, “An isotopically distinct Zealandia-Antarctic mantle domain in the Southern Ocean,” published by the scientific journal Nature Geoscience in January.

“The Australian-Antarctic Ridge is the remotest mid-ocean ridge in the world’s oceans and one of the last explored ridge segments, and, lo and behold, our isotope measurements of the samples we collected provided us with quite a surprise -- an entirely new domain in the Earth’s mantle,” Sims says.

The two were part of a group investigating the Australian-Antarctic Ridge (AAR) that included researchers from the United States, South Korea and France. Known as the last gap in the mapping and sampling of seafloor spreading centers, AAR is a 1,200-mile expanse in the most remote parts of the ocean ridge system. Specifically, the team was looking to resolve questions surrounding the boundaries of Earth’s mantle domains as seen in ocean basalt formations created during mantle melting.

Those basalt formations are pushed up from the Earth’s mantle beneath the Indian and Pacific oceans through the ridges and have distinct isotopic compositions. That has created a long-accepted boundary at the Australian-Antarctic Discordance along the Southeast Indian Ridge. This boundary has been widely used to place constraints on large-scale patterns of the mantle flow and composition in the Earth’s upper mantle. However, sampling between the Indian and Pacific ridges was lacking, because of difficulty in obtaining samples.

Now, Sims, Scott and company present data from the region that show the ridge has isotopic compositions distinct from both the Pacific and Indian mantle domains. The data define a separate Zealandia-Antarctic domain that appears to have formed in response to the deep mantle upwelling and ensuing volcanism that led to the breakup of ancient supercontinent Gondwana around 90 million years ago. The Zealandia-Antarctic domain currently persists at the margins of the Antarctic continent.

The group surmises that the relatively shallow depths of the AAR may be the result of this deep mantle upwelling, and large offset transformations to the east may be its boundary with the Pacific domain.