Researchers Capture First Glimpse of Ruby Seadragons in the Wild 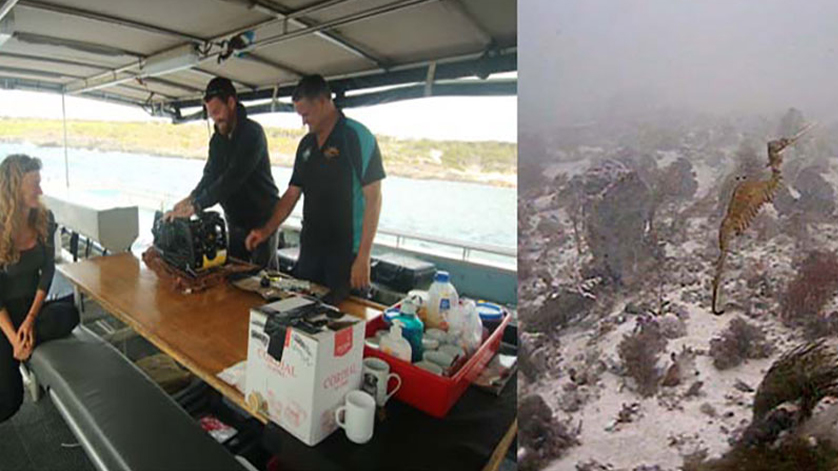 In hopes of getting a rare glimpse of the newly discovered third species of seadragon, researchers at Scripps Institution of Oceanography at the University of California San Diego and the Western Australian Museum led a scientific expedition off the coast of Western Australia to find Ruby Seadragons in the wild.

After several days of searching with a mini-remotely operated vehicle in waters over 50-meters (164-feet) deep, the researchers got what they came for—the first-ever field sightings of the fish near Western Australia’s Recherche Archipelago. As they observed two Ruby Seadragons on video for nearly 30 minutes, the scientists uncovered new details about their anatomy, habitat, and behavior.

This latest discovery of the fish in the wild in April 2016 confirmed that Ruby Seadragons lack ornate leaf-like appendages, a feature that scientists had long considered to be distinguishing characteristics of all seadragons based upon the two known species—Common and Leafy seadragons. Both species use their leaf-like appendages as camouflage in the lush seaweed and kelp meadows where they prefer to live.

Using the preserved specimens, the researchers were able to assemble a rotating 3-D model of the new seadragon using a CT (computer tomography) scan of 5,000 X-ray slices. This is when the lack of elaborate appendages common to all other seadragons first stood out to them.

To determine if the fish truly lacked appendages, or if the museum specimens had lost them prior to or during the collection process, the researchers needed to observe them in the wild. The team partnered with the Australia-based ROV company Total Marine Technology to help observe the new species in its natural environment, which is too deep for regular scuba diving.

“It was really quite an amazing moment,” said Scripps graduate student Stiller, a coauthor of the new study published in the Jan. 13 issue of the journal Marine Biodiversity Records. “It never occurred to me that a seadragon could lack appendages because they are characterized by their beautiful camouflage leaves.”

The second surprise came when they saw that the Ruby Seadragon had a prehensile, or curled tail, similar to that of their seahorse and pipefish relatives, but unlike other seadragon species. From the new observations, the researchers suggest that Ruby Seadragons may use their curled tail to hold on to objects in the high-surge waters where they are found.

During encounters with the fish, the researchers also observed it feed by striking at prey, a behavior common to the species. These observations of the species in the wild confirmed the fish’s ruby red coloration and that their habitat lacks kelp and seagrass, but instead is dominated by sponges, once considered an undesirable habitat for seadragons.

The researchers believe the Ruby Seadragon lost its appendages through evolution, and that its red color acts as camouflage in the deeper dimly lit waters where it lives. Whether they evolved a curly tail independently from their pipefish ancestors, or simply retained it while the other seadragons lost it, will require further study.

“There are so many discoveries still awaiting us in southern Australia,” said Wilson, a coauthor of the study. “Western Australia has such a diverse range of habitats, and each one is deserving of attention.”

In hopes of safeguarding the new species from overfishing, the research team recommends that the Ruby Seadragon be protected as soon as possible.

“Until last year, no one had ever suspected a third species of seadragon existed,” said Rouse, lead author of the study and curator of the Scripps Benthic Invertebrate Collection. “This discovery was made thanks to the great benefit of museum collections.”