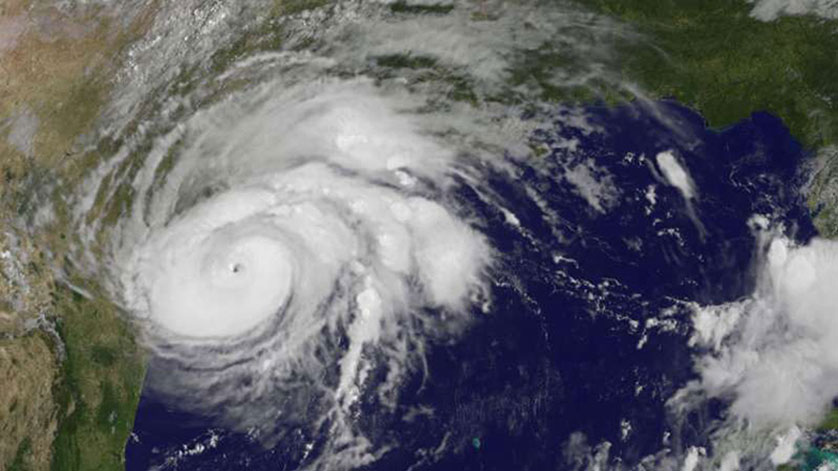 In the weeks before Hurricane Harvey tore across the Gulf of Mexico and plowed into the Texas coast in August 2017, the Gulf's waters were warmer than any time on record, according to a new analysis led by the National Center for Atmospheric Research (NCAR).

These hotter-than-normal conditions supercharged the storm, fueling it with vast stores of moisture, the authors found. When it stalled near the Houston area, the resulting rains broke precipitation records and caused devastating flooding.

"We show, for the first time, that the volume of rain over land corresponds to the amount of water evaporated from the unusually warm ocean," said lead author Kevin Trenberth, an NCAR senior scientist. "As climate change continues to heat the oceans, we can expect more supercharged storms like Harvey."

Despite a busy 2017 hurricane season, Hurricane Harvey was more or less isolated in location and time, traveling solo over relatively undisturbed waters in the Gulf of Mexico. This gave Trenberth and his colleagues an opportunity to study in detail how the storm fed off the heat stored in that 930-mile wide ocean basin.

The team compared temperatures in the upper 160 meters (525 feet) of the Gulf before and after the storm using data collected by Argo, a network of autonomous floats that measure temperature as they move up and down in the water. To measure rainfall over land, the scientists took advantage of a new NASA-based international satellite mission, dubbed Global Precipitation Measurement.

The study appears in the journal Earth's Future, a publication of the American Geophysical Union. It was funded by the U.S. Department of Energy and by the National Science Foundation, which is NCAR's sponsor. Other co-authors of the paper are Yongxin Zhang and John Fasullo, also of NCAR; Lijing Cheng, of the Chinese Academy of Sciences; and Peter Jacobs, of George Mason University.

As hurricanes move over the ocean, their strong winds strafe the sea surface, making it easier for water to evaporate. The process of evaporation also requires energy from heat, and the warmer the temperatures are in the upper ocean and at the ocean surface, the more energy is available.

As the storm progresses over the ocean, evaporating water as it goes, it leaves a cold wake in its path. In the case of Hurricane Harvey, the scientists found the cold wake was not very cold. So much heat was available in the upper layer of the ocean that, as the surface temperature was cooled from the storm, heat from below welled up, rewarming the surface waters and continuing to feed the storm.

The near-surface ocean temperature before the storm's passage was upward of 30 degrees Celsius (86 degrees Fahrenheit), and after passage the temperature was still around 28.5 C (83ºF). Sea surface temperatures above 26 C (79ºF) are typically needed for a hurricane to continue to grow.

Even after Harvey made landfall, its arms reached out over the ocean, continuing to draw strength (and water) from the still-warm Gulf.

"The implication is that the warmer oceans increased the risk of greater hurricane intensity and duration," Trenberth said. "While we often think of hurricanes as atmospheric phenomena, it's clear that the oceans play a critical role and will shape future storms as the climate changes."

The scientists were able to measure the total loss in ocean heat, mostly due to evaporation, as the storm moved over the Gulf. They also measured the latent heat released over land as the water vapor turned back into liquid water and fell as rain. They then compared those two measurements and found that they corresponded.

The study highlights the increased threat of future supercharged hurricanes due to climate change, Trenberth said.

"We know this threat exists, and yet in many cases, society is not adequately planning for these storms," Trenberth said. "I believe there is a need to increase resilience with better building codes, flood protection, and water management, and we need to prepare for contingencies, including planning evacuation routes and how to deal with power cuts."