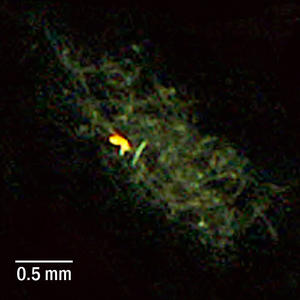 To understand the role of the ocean in global environmental change and to progress oceanography in developing countries the National Oceanography Centre (NOC) will be leading a working group aiming to build the world’s largest database on carbon flux measurements from optical sensors.

Called TOMCAT, this group will include research organizations from developed and developing countries and has announced it has received funding from the Scientific Committee of Ocean Research (SCOR) to start work.

Understanding the ocean’s ability to store carbon dioxide requires more information about the movement, or flux, of carbon from the upper to the deep, dark ocean, where it can be ‘stored’. Knowing the carbon flux for sites across the world and through different seasons is vitally important for understanding how the oceans control the climate.

A small copepod Microsetella (orange speck) feeding on a particle at 300m depth in the North Atlantic. Foto: Klas Möller

However, it is not yet known how to reliably translate images of carbon particles from optical sensors into a carbon flux measurements. Furthermore, the different optical sensors used to collect particle data make it difficult to compare data, and there is no efficient means of analyzing the increasingly large data sets.

TOMCAT aims to identify the best techniques and algorithms for measuring carbon particle flux, as well as setting up a global, free-to-access data-base of all measurements taken using optical sensors.

Dr. Sarah Giering from the NOC, who is the project chair, said “We are looking to bring together measurements and scientists from as many countries as possible so we can develop an efficient and global means of progressing the field of ocean carbon measurement – a field that has the potential to answer questions of global social and economic significance, such as the role of the ocean in global environmental change.

Another of our key objectives is to advance oceanography in developing countries by finding the most effective way of using optical sensors, which are relatively cost efficient.”

The Video Plankton Recorder, for example, works by taking images through the water column. These images have such a high resolution that scientists are able to pick out features as small as a half-a-millimeter copepod swimming into a particle. Analyzing these images will provide scientists with information about the type and density of particles sinking through different points in the ocean. Other sensors work by using the attenuation of light through the ocean water column as a proxy for the volume of particles within it. Many of these sensors have the advantage of being small enough to mount of an Argo float or a robotic glider, which will enable them to move around, increasing the spatial resolution.

TOMCAT forms part of the NOC’s ongoing research into developing innovative sensors and studying the ocean’s carbon cycle. The other partners involved are 15 institutes from across the world, including the US, Brazil, South Africa, Japan and Australia.