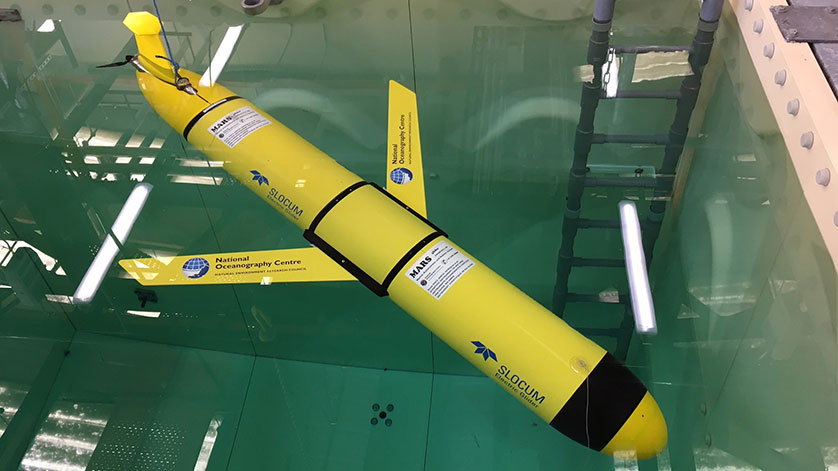 NOC oceanographer Dr. Stephanie Henson has been awarded a major research grant from the European Research Council (ERC). GOCART (Gauging Ocean organic Carbon fluxes using Autonomous Robotic Technologies) is an ambitious 5-year project that will use autonomous underwater vehicles to investigate the variability of the ocean’s “biological carbon pump”, without which, atmospheric CO2 levels would be 50% higher than they are now.

The ERC Consolidator Grant aims to fund scientists wishing to establish their own research teams at their host institution. Professor Ed Hill, Director of the NOC commented, “We are delighted that Dr. Henson has received such a prestigious award. These independent grants are vital for our scientists to become world-leaders in their field and we look forward to supporting Dr. Henson and her team.”

Organic carbon fluxes form part of the ocean’s biological carbon pump, which starts with primary production by phytoplankton in the upper ocean which takes up CO2 from the atmosphere. Some of this carbon sinks into the Twilight Zone (deeper than 200m) where most of it is broken down (remineralized) and turned back into CO2. The sinking carbon reaching the deep ocean is crucial to Earth’s climate as it is sequestered in the ocean interior for 100’s to 1000’s of years. However, the amount of carbon stored in the deep ocean is primarily a function of the depth at which this sinking organic carbon is remineralized in the Twilight Zone; the deeper carbon penetrates, the longer it is stored, and the greater the effect on atmospheric CO2. GOCART will explore the implications of variability in organic carbon flux for understanding the ocean’s capacity for long-term carbon storage.

Dr. Henson commented, “The depth at which remineralization occurs is the main factor affecting the amount of organic carbon stored in the ocean. Currently we do not understand how or why remineralization depth varies in time, which limits our ability to make robust predictions of how the future carbon cycle, and hence the Earth’s climate, will change into the future.”

Using underwater glider deployments, and integrating a unique and novel combination of sensors, GOCART researchers will be able to establish the characteristics and significance of temporal variability in organic carbon flux and remineralization depth. To achieve this, gliders will be deployed in two different regions of the South Atlantic chosen for their contrasting environmental conditions. The first deployment will take place from the RRS Discovery later this year in the in the Southern Ocean, near South Georgia, with further deployments scheduled for 2018 in a low oxygen zone off Namibia.

Historically, the temporal variability in remineralization is challenging to assess using conventional approaches (e.g. drifting sediment traps) as instruments must be deployed and recovered during research expeditions, limiting the quantity of data. On receiving the grant, Dr. Henson said, “The ERC award will allow my research team to use innovative autonomous technologies to gather data which will be key to reducing uncertainty in model predications of ocean carbon storage. My hope is that GOCART will revolutionize our understanding of this important planetary carbon flux.”

This project has received funding from the European Research Council (ERC) under the European Union's Horizon 2020 research and innovation program under grant agreement No 724416.