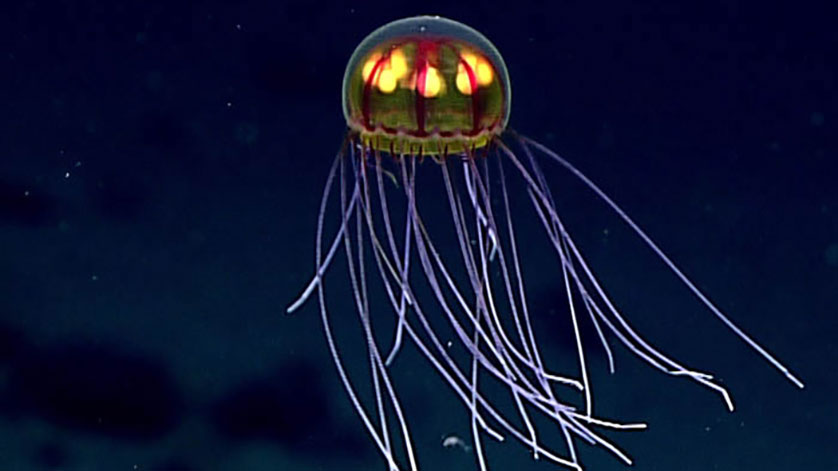 The NOAA Ship Okeanos Explorer will send a remotely operated vehicle into deepwater protected areas of the central Pacific Ocean this week – and you can follow along live online.

Using the Deep Discoverer ROV, scientists will investigate deepwater habitats, geology, and the biology of sea animals as it dives as far as 3.7 miles (6,000 meters) deep. The public can watch online.

The 2017 explorations will run through September and are part of the third and final year of NOAA’s Campaign to Address Pacific monument Science, Technology, and Ocean NEeds, known as CAPSTONE, a major multiyear science initiative focusing on the deep ocean of U.S. marine protected areas in the central and western Pacific. Managers of protected areas, the science community, and others will use the information NOAA collects to make informed decisions and learn more about the deep ocean.

“With each expedition we not only provide scientists and decision makers with the necessary data to conduct their work, but also reach new audiences who are fascinated by what we are seeing in the deep ocean,” said Alan Leonardi, Ph.D, director of NOAA’s Office of Ocean Exploration and Research, the federal program responsible for coordinating the expeditions.” This public engagement improves science literacy and fosters an interest in the sciences among young people – perhaps leading to the next generation of ocean explorers.”

The 2017 expeditions will take place in and around the National Marine Sanctuary of American Samoa, the Rose Atoll Marine National Monument, the Musicians Seamounts, and the Pacific Remote Islands Marine National Monument, including the areas of Howland, Baker and Jarvis Islands, Palmyra Atoll and Kingman Reef, and Johnston Atoll. While this year’s dives will focus on waters of the United States Exclusive Economic Zone, NOAA will partner with several Pacific Island countries to explore the deep waters of Samoa, the Republic of Kiribati’s Phoenix Islands Protected Area, the Cook Islands, and New Zealand’s Territory of Tokelau.

CAPSTONE, which began in July 2015, focuses on collecting baseline information to support science and management needs in these vast and largely unexplored areas. CAPSTONE also provides critical information relevant to emerging regional issues like deep-sea mining and the potential expansion of the U.S. Extended Continental Shelf. Extensive levels of cross-NOAA support and collaboration, as well as interagency and academic partnerships, have been crucial to both setting priorities and conducting exploration activities.

“We never know exactly what we’ll see,” said Kelley Elliott, expedition manager. “During the first two years of CAPSTONE, Okeanos Explorer expeditions discovered new species, observed known animals in new locations or exhibiting unseen behaviors, and found living animals previously only seen as lab specimens.” A wide range of scientists, students, and managers have participated in more than 100 ROV dives under CAPSTONE, and live video streamed to the web from the ROVs has received more than five million views. The Okeanos Explorer also maps the seafloor, and to date has mapped more than 300,000 square kilometers, an area roughly the size of Italy, under CAPSTONE. During both its mapping and ROV expeditions, the ship routinely collects data on seafloor depth, the composition of the seafloor, and water temperature and chemistry.

The 2017 expeditions will be covered on the NOAA Office of Ocean Exploration and Research website.

NOAA Ship Okeanos Explorer is operated, managed and maintained by NOAA's Office of Marine and Aviation Operations which includes commissioned officers of the NOAA Corps and civilian wage mariners. NOAA's Office of Ocean Exploration and Research operates, manages and maintains the cutting-edge ocean exploration systems on the vessel and ashore.