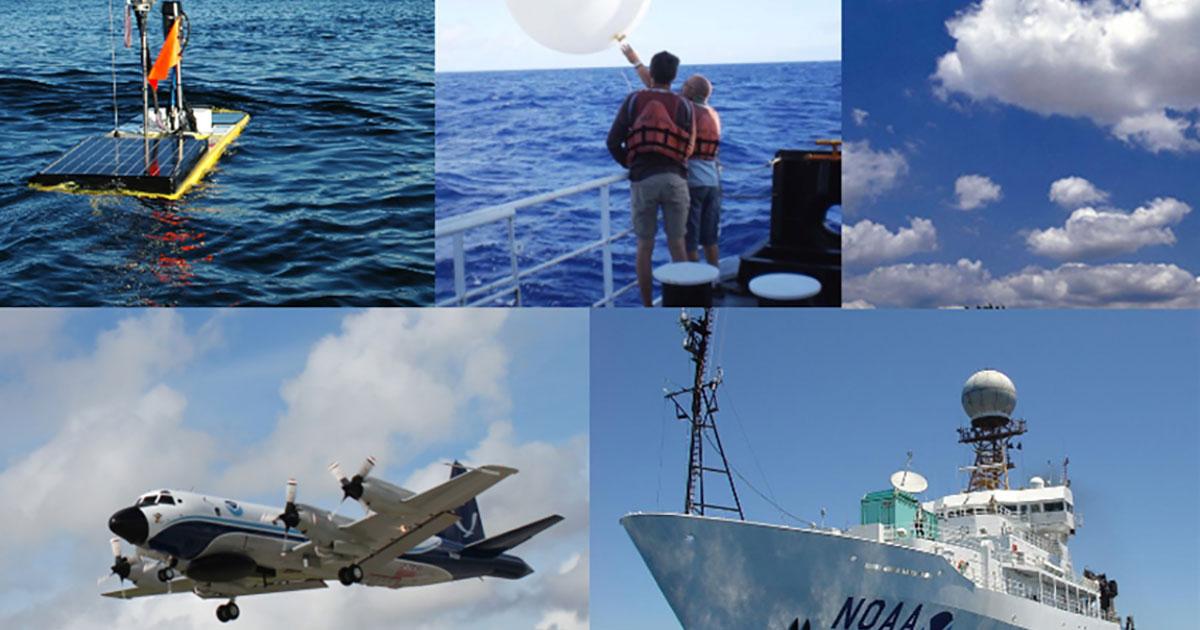 Picture a calm, sunny day at a tropical beach. You look out at the ocean and in the distance a flotilla of small white clouds sails close to the waves. It’s ideal weather and typical of many days in the tropical Atlantic. However, scientists don’t fully understand how these ubiquitous clouds (a type of “shallow convective cloud”) form and impact the ocean, and it represents one of the largest uncertainties in predicting climate change.

Driven by the sun’s energy and tropical winds, complicated interactions between the air and sea create shallow convective clouds. These clouds then impact the humidity and ocean temperature, affecting how new shallow convective clouds form. Our weather and climate models poorly represent these details, but shallow clouds and air-sea interactions influence conditions seen all across the world — from global temperature and precipitation to extreme events.

NOAA has launched a six-week scientific campaign from the island of Barbados in the Caribbean, using multiple human-piloted and autonomous vehicles, buoys, radar, and computer modeling to investigate how the ocean, atmosphere, and shallow clouds work together to create the weather and climate we live in.

Called ATOMIC, or the Atlantic Tradewind Ocean-Atmosphere Mesoscale Interaction Campaign, the mission is the U.S. component of a collaborative effort that includes Germany, France, United Kingdom, United States, and Barbados called EUREC⁴A (Elucidating the Role of Clouds-Circulation Coupling in Climate). ATOMIC will involve experts from three NOAA Research labs, NOAA pilots and crew, the Caribbean Institute for Meteorology and Hydrology, several universities, and other partners to address this complex problem.

"ATOMIC will advance our scientific understanding of how the ocean and atmosphere including clouds work together to create weather,” added Brian Gross, NOAA’s National Weather Service Environmental Modeling Center Director. “We'll use this to enhance our models to improve the guidance they provide National Weather Service forecasters, and ultimately service to the public.”

Collecting data for the Caribbean and beyond

From January 7 through February 13, 2020, the research team will travel east and south of Barbados to take measurements of different variables in the air and the sea.

“This region in the heart of the trade winds is like a real-world laboratory,” said Fairall. “It represents other areas across the global ocean where air-sea interactions make the same shallow convective clouds.”

By studying the region in the winter, Fairall said, the researchers can observe the ocean, air, and clouds in near isolation from the impacts of storms and hurricanes. This will help them acquire a better understanding of how the ocean makes shallow clouds, and how these clouds, the basic building blocks for storms, affect larger weather and climate patterns.

NOAA’s scientists will focus primarily on the ocean in two study sites. One is where Earth’s largest circular ocean currents (or eddies) spin off from the Amazon and Orinoco Rivers, and drift into the study region. These eddies are potential heat reservoirs, providing energy and moisture to create shallow convective clouds. However, the origin of eddies, their properties, and their interaction with the lower atmosphere to drive cloud development are poorly understood.

The second site is in the trade-wind region, where winds consistently blow along the ocean surface. Observations from this region will help scientists understand how wind-ocean interactions provide moisture and heat to the atmosphere.

“We know very little about how these processes vary across fields of clouds and eddies because they have never been measured concurrently in one focused region, and satellites cannot measure them all at the same time,” said Elizabeth Thompson, ATOMIC and NOAA ESRL scientist. “Yet, they hold immense power in controlling our climate-weather system.”

“This is a very exciting opportunity to collaborate with our international partners, using new and innovative technologies to sample the ocean and atmosphere to see how it all works together,” said Sandy Lucas, ATOMIC project lead and NOAA Climate Program Office Climate Variability and Predictability Program Manager. “The information we gather will help support a weather-ready and climate-smart Nation.”