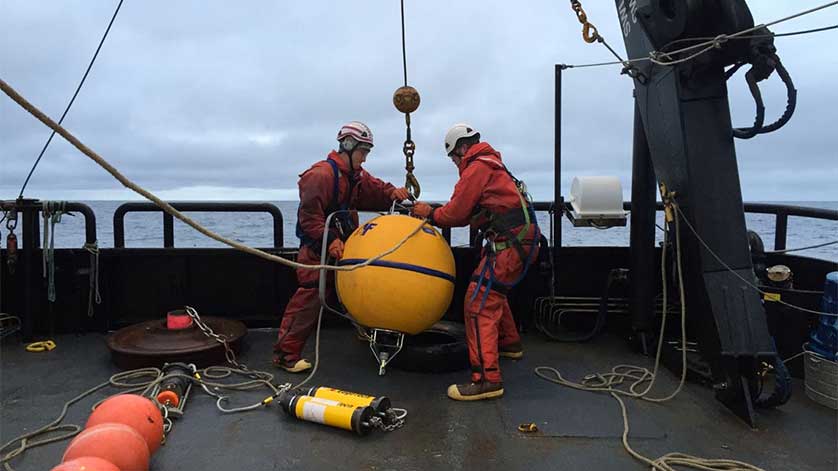 A research team led by the University of Alaska Fairbanks will be able to continuously measure ocean conditions in the productive Gulf of Alaska ecosystem, thanks to major support from the M.J. Murdock Charitable Trust and matching funds from the Alaska Ocean Observing System.

Researchers from the UAF College of Fisheries and Ocean Sciences, Laval University and the University of Washington will install a mooring system in the Gulf of Alaska that measures a range of ecosystem parameters, including physics, nutrient and carbonate chemistry, plankton, fish, marine mammals, and particles. The data will help build understanding of ecosystem processes and connections between different ecosystem components. 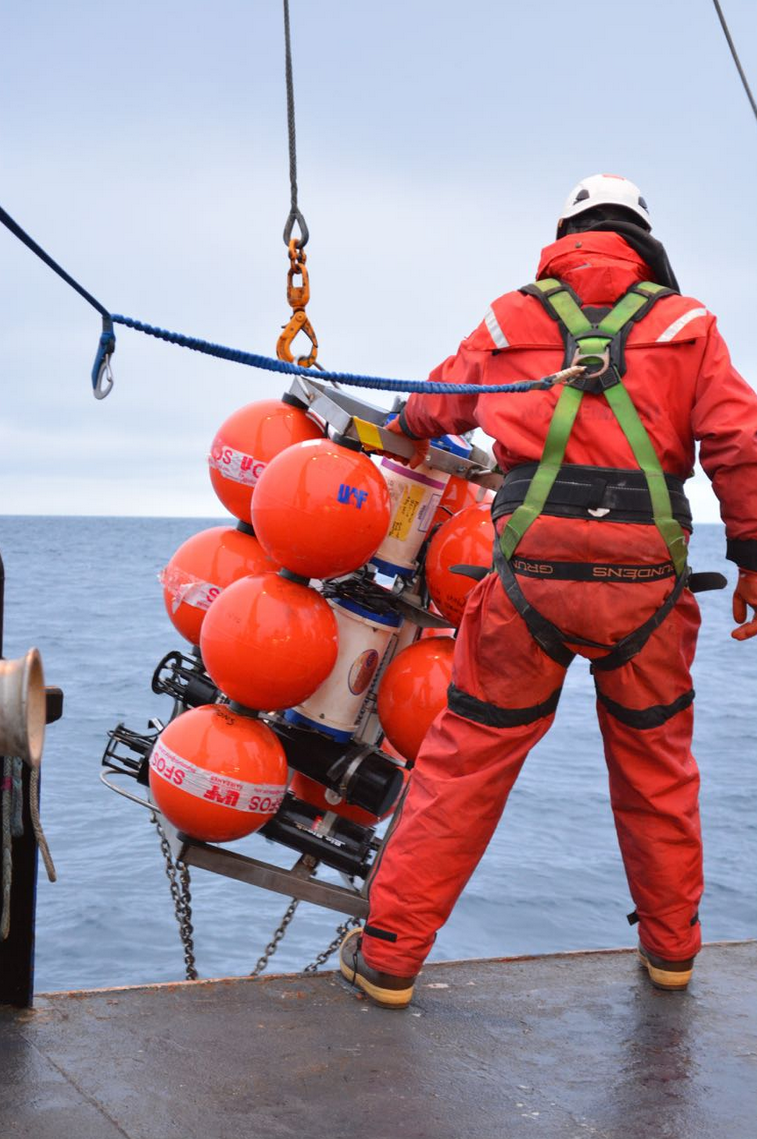 “This project will add to the growing network of ocean observatories off Alaska and provide new discoveries and opportunities only afforded by real-time and interdisciplinary observations,” said CFOS Dean Bradley Moran.

A ship crew member holds a Chukchi Sea mooring that contains floatation and housing for an acoustic zooplankton and fish profiler and biogeochemical sensors. Photo courtesy of the Chukchi Ecosystem Observatory

The mooring will be placed approximately 60 miles southeast of Resurrection Bay along the Seward Line, a set of oceanographic survey stations that extends from Seward to beyond the outer edge of the continental shelf. Researchers have been collecting data along the Seward Line for nearly five decades. The data provided the framework for a new National Science Foundation Long-Term Ecological Research Program study site in the northern Gulf of Alaska. Maintenance and upkeep of the new mooring will be folded into the yearly LTER work.

The mooring will deliver new kinds of data to scientists. The Seward Line program brings two research expeditions to the Gulf of Alaska each year, and, with the LTER grant, researchers will add a third. The new mooring will collect year-round continuous measurements of select parameters that represent many components of the marine ecosystem. These observations will help to fill gaps in knowledge and enable researchers to learn about how the Gulf of Alaska functions at different times of the year and over longer timescales.

“We know immense changes are occurring in our marine ecosystems,” said Molly McCammon, AOOS executive director. “Changes such as increased acidity, warmer temperatures and more frequent harmful algal blooms all could have profound impacts on commercial, sport and subsistence fisheries and the Alaskans who depend on them.”

With support from AOOS and the North Pacific Research Board, the same research team currently maintains a similar moored observatory at a site in the Chukchi Sea frequented by feeding walrus in the summer. The AOOS long-term plan is to establish one of these buoy systems in each of Alaska’s large marine ecosystems: the Bering, Beaufort and Chukchi seas, and the Gulf of Alaska.

“It took us three to four years to get all of the bits and pieces needed to build the moorings that we have up in the Chukchi Sea,” said CFOS professor and project lead Seth Danielson. “With the help of the M.J. Murdock Charitable Trust, we’re going to have our Gulf of Alaska mooring completely outfitted in the course of one year.”

With nearly $400,000 from the M.J. Murdock Charitable Trust, the project partners will invest more than $1 million in equipment and effort over the next four years. The remaining support comes from AOOS, UAF, NSF, NPRB and the Exxon Valdez Oil Spill Trustee Council.